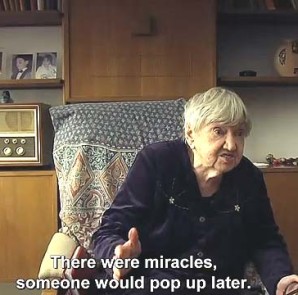 FAREWELL HERR SCHWARZ, a Israel-Germany co-produced documentary by Yael Reuveny, will open in New York City on January 9, 2015. In addition to being screened at The Quad Cinema, it will be shown at the JCC Manhattan on Saturday evening, January 10. Also known as Schnee von Gestern / Hayah Shalom Peter Schwarz – the film won a top award in 2013 at the Haifa International Film Fest and at the Schleswig Holstein Film Festival in 2014. It was also named as a Best First Film by the Israeli Documentarists last month. Distributed in the US by Kino Lorber, it was produced by Melanie Andernach, Naomi Levari, and Saar Yogev.

FAREWELL, HERR SCHWARZ is a documentary about the family stories that one inherits as one inherits one’s eye color. It is a story of two Jews in Germany, a single post-War missed meeting, a brother and a sister, two families, and three generations.

Dr. Reuveny’s grandmother, Michla, survived the death camps during WWII. After the war, she searched for her favorite brother, Feivush; she heard that he had survived Buchenwald. A friend was supposed to arrange a reunion between the two of them at a Lodz train station, but it never materialized. Reuveny’s grandmother emigrated to Israel and raised a family; she never saw her brother. It turns out that Feivush moved to the town of Schlieben, home to a Buchenwald sub-camp, changed his name to Peter, married a non-Jewish German woman, and raised a family. He became an East German businessman and never spoke of the war.

Yael grew up with stories of her lost great Uncle. An Israeli, she settled in Germany over five year’s ago, to the dismay of her parents, and she began to search for what happened to Feiv’ke/Feivush/Peter.

About 25 years ago, the family learned that Peter had passed away and was buried in Schlieben. In her film, Yael travels there and meets Helga, Peter’s widow, and is surprised to peruse family pictures with Helga – some of which feature Helga’s brothers in their Wehrmacht uniforms. Later in the film, we meet Uwe, Peter’s son. He is looking to build links between the families. Yael’s mother, however, will not set foot in Germany, even to visit her daughter. It turns out that Uwe’s son (Peter’s grandson), Stefan, works as the curator of Berlin’s Great Synagogue. Uwe, a member of the third generation dreams of moving to Jerusalem; while cousin Yael dreams of Germany. Yael asks blunt and pointed questions of her cousins, Israeli family, and newly found German family members. But she also asks herself what it is like to be an Israeli in Germany today.