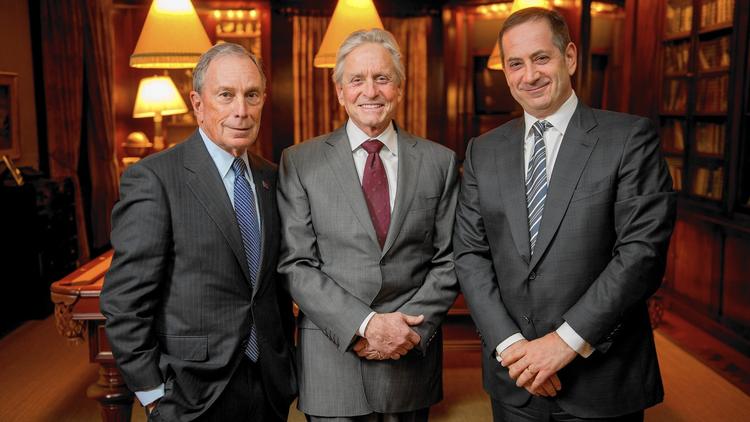 What fortune Michael Douglas has!

You know the story of the two diamond merchants who spend their life selling the same diamond between themselves, back and forth, raising the margin up a little at a time. That is how I feel about the $1 Million Genesis Prize, awarded to a person who helps Jewish life over their lifetime.

And this year, the actor, producer, director, and philanthropist Michael Douglas will receive the $1 Million. His net worth is estimated to be only $300 Million.

Mazal Tov to Michael, as well as his wife, actress Catherine Zeta-Jones.

The Genesis Prize is a product of the State of Israel’s Prime Minister’s Office and the Jewish Agency for Israel. The Russian-Jewish grounded Genesis Philanthropic Group funds most of the prize. The selection committee included the Jewish Agency’s Natan Sharansky, Knesset Speaker Yuli Edelstein, Chief Rabbi of the UK (Emeritus) Lord Jonathan Sacks, and author Elie Wiesel.

Upon hearing the news of the award, Douglas said, “I share this award with my family, who encouraged me in my exploration of the Jewish faith. I hope these teachings and values will be part of the legacy in the world that I leave for my children and those who follow.”

Michael’s father is 98 year old Kirk Douglas (born Issur Danielovitch), and his mother is Diana Dill. As he grew older and married, Michael Douglas embraced his Jewish identity and in 2014, he traveled to Jerusalem to celebrate the bar mitzvah of his son, Dylan.

Michael said that as someone who identifies as a Reform Jew who is in an interfaith marriage, he has often been made to feel estranged from his faith by some Jews. But in the past few years, he was inspired by his son Dylan’s devoutness and his father Kirk’s reaffirmation of his Jewish heritage. Kirk Douglas celebrated a bar mitzvah ceremony at the age of 83.

Douglas said that he hoped the award would “encourage a new generation and remind them what their roots are and that they are welcome” in the fold. Stan Polovets, co-founder and chairman of the foundation, said, “It’s an unconventional choice… [Michael was chosen for] his professional achievements and for his passion for his Jewish heritage and the Jewish state.” Polovets, a Stanford grad and head of the Russian energy firm, AAR Consortium, said that the group seeks to promote diversity in the Jewish community and focuses on less religious Jewish youth to embrace their heritage.

Bloomberg donated his prize money to set up genesis related fellowships. Douglas said that he plans to use his prize to support projects that promote inclusiveness in Jerusalem.

The Genesis Philanthropy Group endowed its prize with about $100 million in funds. It was co-founded by Polovets, German Khan, Pyotr Aven, Alexander Knaster, and Mikhail Fridman.

As for 2016…. My money bet is on either Sir Michael Kadoorie or Michael Dell, since it appears that your name has to be Michael in order to win.