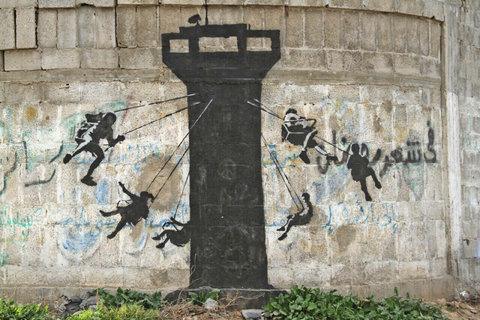 Banksy, the nom de guerre for a UK based satirical graffiti artist, is famous for his postings and stencils on walls and buildings. Most of them are quickly stolen and sold for tens or hundreds of thousands of dollars.

This week he posted a film about Gaza on Youtube.com which garnered over 1 million views in a few days. It the short film, a filmmaker appears to sneak into Gaza through a tunnel, show devastation, indict Israel and Egypt for disregard of suffering, show the border with Israel, and post cute Banksy art on a few walls.

It is not known when the footage was shot for this film. In 2005, Banksy posted images along the separation wall on the West Bank. In 2007, he painted an image of a young girl patting down an IDF soldier.

A publicist who says she speaks for anonymous Banksy stated that Banksy said: “I don’t want to take sides. But when you see entire suburban neighborhoods reduced to rubble with no hope of a future — what you’re really looking at is a vast outdoor recruitment center for terrorists. And we should probably address this for all our sakes.”