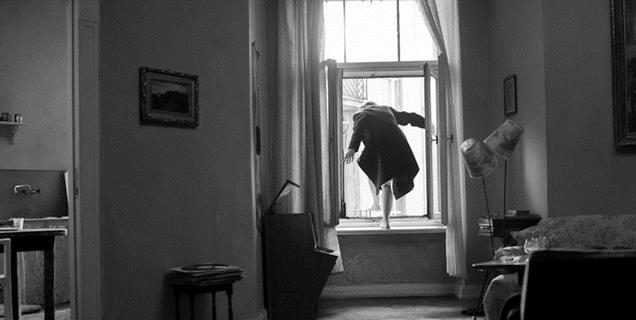 Ida, a Polish film by Pawel Pawlikowski, received the top honor for a film “Not in English” at the BAFTA British film awards this week at Covent Garden’s Royal Opera House. The film tells the story of Anna, an orphaned young woman who has been raised in a Catholic convent and aspires to be a nun.

Prior to becoming a nun, she is told by her Mother Superior that she should leave the convent and visit her only living relative, Wanda, an aunt who is a tough, promiscuous Stalinist judge in 1960’s Communist Poland. Known as Red Wanda for her tough prosecutions of anti-Socialists, she has recently been demoted to just a magistrate. When Anna meets her hard-living Aunt Wanda, she learns that she was born Jewish, that her name was Ida Lebenstein, her parents were killed during the war, and she was hidden in a convent. Anna is played by Agata Trzebuchowska. Wanda is played by Agata Kulesza, one of Poland’s greatest, most recognizable current actresses.

Anna and Wanda – the bible reading saint and the has-been slut – embark on a trip towards Lublin to find the home where Anna was born and to find out what happened to her parents. Anna is coaxed to try on some secularism, but not her Jewishness on the trip; and perhaps that is a commentary on the church’s teaching or Anna’s focused mindset.

Fortunately, they find the peasant family that hid Anna’s parents and they agree to tell Anna the truth as long as they don’t try to take back her family’s house in which they now live. Wanda serves as an excellent interrogator to get at the truth. Anna/Ida learns that her family’s saviors were also their murderers. They also killed Anna’s young circumcised brother, but placed her in a convent since she could pass as Christian.

This film has won over 70 awards at international festivals and sold over half a million tickets in France and 200,000 in both Spain and Italy. The Museum of Cinematography in Lódz has staged an exhibition documenting the production process of the film, which forces, even in 2015, Poles to face their own – or their dual – involvement in the atrocities if WWII.

It is nominated for an Oscar in the Best Foreign Film category.

The Vemeer-like black and white film has been lauded for avoiding cliches and using the monochromatic palette exceedingly well and not as an artsy gimmick. The characters appear in the bottom third of the screen; I suppose this is to reinforce the sense that Polish society is weighed down by its high ceiling history.