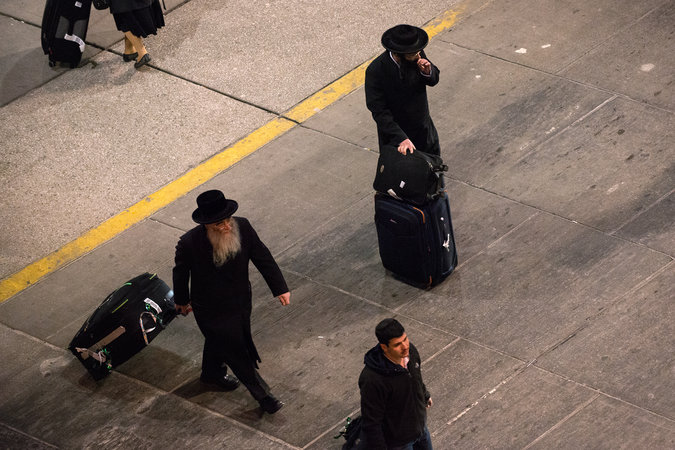 What a week for newsbits.

Last Friday, as Passover was concluding, The New York Times published a front page.. FRONT PAGE… story on some male, Orthodox Jewish air passengers who ask for seat changes so as not to have to sit next to a female passenger. The story generated nearly 3,000 comments in a few hours, and guess what,… most were negative against the male Jewish passengers. Shocker. And some of the most negative were written by co-religionists. Shocker^squared

It reminds me of a story. A person went up to a bearded man in a hat and harangued him for his backwards ways, traditions, and rigid roles based on gender. They said they were irritated and frustrated by Orthodox Jewish men. But madam, the bearded man replied, I am not Jewish, I am Amish. Ohhhhhhh, the angry person replied, ….I just love how quaint and traditional the Amish are.

But back to Michael Paulson’s NYT story: When a Plane Seat Next to a Woman Is Against Orthodox Faith. In the news piece, we learn that from Agudas Israel’s spokesperson that “The haredi men I know, have no objection to sitting next to a woman on any flight.” But Rabbi Shafran doesn’t know everyone. Rabbi Ysoscher Katz, a Talmud scholar who grew up in the Satmar community told the reporter, “When I was still part of that community, and on the more conservative side, I would make every effort I could not to sit next to a woman on the plane, because of a fear that you might touch a woman by accident.”

Columnist Nicholas Kristoff shared the article with his 600,000+ Facebook followers, saying, “So what do you do if a man asks you to change seats on an airplane because, for religious reasons, he doesn’t want to sit next to a woman? Should one switch, for reasons of courtesy and respect? Should one refuse, for switching would only legitimize a bigoted attitude toward women as temptresses? What do you think?” That got hundreds of replies

A few days later, The Times Business section wrote about the “sport” of seat changes on flights, in light of the price differences between regular and premium locations on the jet.

The Philadelphia Inquirer profiled a top scholar of Jewish deli products, Dr. Ted Merwin Merwin, a professor of religion at Dickinson College has published a book titled, Pastrami on Rye: An Overstuffed History of the Jewish American Delicatessen. His insights are delicious.

I needed a break from airlines and delis. So I checked out news from Capitol Hill. TheHill.com, a Murdoch owned tabloid in DC wrote that Park Slope Brooklyn resident and U.S. Senator Chuck Schumer (D-NY) may break fundraising records this year. He will most likely be the top Democrat in the U.S. Senate in 2017. They say he is relentless. Too bad he doesn’t work for the UJA, since he is said not to take no for an answer. According to the story: “When handed a $25,000 check, he’s been known to respond, “You can do a little better than that.” He’s asked donors to send him contributions by courier to quash any possible excuses about a “check in the mail.”” The Democrats’ Senatorial fundraising fund increased by $32 million (a double chai, 36% increase) after Schumer took over as chairman for the 2006 cycle. Its takes under Robert Menendez (D-NJ) and Patty Murray (D-WA) were not as large when they took over from him.

Speaking of tapping,…. Politico reported this week on U.S. Senator Ted Cruz’s (R-TX) outreach to Orthodox Jews. Leaders in the Orthodox community point approvingly to his vigorous opposition to the administration’s negotiations with Iran, his comfort level with religious references and, his passionate support for Israel. “I share a great many values with the Jewish community and the Orthodox community.” Cruz said. In the past several weeks alone, Cruz has met with an influential Orthodox rabbi from New York, hosted an event with Holocaust survivor Elie Wiesel to highlight the dangers of a nuclear Iran, and made an appearance at a swanky Passover gathering in California that drew wealthy Orthodox Jews. “The Orthodox segment is more open to supporting Republicans, and some individuals in the Orthodox community are active in political fundraising contributions,” said Nathan Diament, head of the Orthodox Union, who said Cruz has been the most “proactive” of the 2016 contenders in engaging Orthodox Jews.

On Wednesday, by voice vote, The House of Representatives VERY QUIETLY passed legislation that would protect major donors like the Koch brothers, Sheldon Adelson and Tom Steyer from having to pay gift taxes on large donations to “secret money” political groups. The bill now heads to the Senate. It will remove one of the few remaining potential obstacles to unfettered big-money spending by nonprofit groups registered under a section of the Tax Code — 501(c) — that allows them to shield their donors’ identities.

Talking about proactive, New York City not only fined but arrested two infamous, violent slumlords in Brooklyn this week. Oren Yaniv, writing for the NY Daily News, reported that Joel and Aaron Israel allegedly allowed stray cats and rats into one building and had a man move into the building and walk around with two pit bulls and a baseball bat to frighten tenants.

I needed some lighter news, so I looked out West where The Stanford Daily reported that the Hillel at Stanford hosted photographer Bryan Schwartz to speak at the gallery opening of his show, titled “Jews of Color: A Renaissance,” which will remain on display at Hillel until June 30. The show depicts Jews all around the world, accompanied by paintings by the artist Samuel Renaissance.

But of course, I was also reminded that students at Stanford are being confronted with a similar style of anti-Jewish sentiment as students at UCLA At Stanford University’s student government election, a Jewish student – Molly Horowitz – claims that she was asked how her Judaism affects her view of divestment from Israel, morphing what was a contest about campus issues into a fierce discussion on identity and loyalties, and whether a student who was born in Paraguay and grew up Jewish in Milwaukee could self identify and be accepted as as Jewish and Latina.

If this was not chutzpahdik enough of some Stanford undergrads, Univision announced that SABADO GIGANTE is being canceled and it will end this Fall. The show, hosted by Chilean-born Senior Mario Kreutzberger, 74, known on air as Don Francisco, has had consistent ratings in recent years, have grown in each of the last three quarters and averaged 2.1 million viewers a weekend. The final show is September 19, 2015, or as Don Francisco can tell you: the weekend after Rosh Hashana.

I needed to find much lighter news. How about Chicago? Hilary Clinton announced that she will be a candidate for the U.S. Presidency in 2016. Her launch video was released on Sunday and featured a gay/Jewish couple Jared Milrad and his boyfriend Nathan are a Chicago couple with Boston roots and were asked by Organizing for America to participate in a video. They discuss their upcoming Summer wedding, and will invite Mrs. Clinton to the intimate event. Jared Milrad, 31, a grandson of Samuel Nissenbaum, works as an attorney, artist, and social entrepreneur. Did I mention that he is a vegan? He did. He founded the non-profit Civic Legal Corps. Lots of nachas. Nathan, 30, works in health care consulting. Jared worked on the Obama campaign in 2008 as a field organizer and then moved to Boston where Nathan was his friend’s roommate. It was love at first sight. Nathan, a Michiganite, fell for Jared, a passionate Jewish guy from Roosevelt Island, NYC and its environs.

Even lighter? How about in Israel. Haaretz was my savior. The interviewed three matchmakers that specialize in the romantic needs of “Anglo” immigrants to Israel. According to the story, immigrants from the English speaking countries have special needs. Matchmakers can facilitate the day after the first date phone call or lack of phone calls. They find out if there was chemistry or a desire for a second date. Jessica Fass’s ironclad rule for her clients is – no sex on the first date.

Speaking of getting into bed on a first date, Jay Michaelson write in the Jewish Daily Forward that Jews should not be upset by the JNF giving an award to the anti-gay but pro-Israel Southern Baptist preacher and evangelical leader: Dr. Charles Stanley. He writes, “When Jews get in bed with the Hard Right, this comes with the territory.”

Is this a lot of manure? If I wanted manure, I would have attended the convention of Jewish farmers in Encinitas.

Sigh. I am glad the week is over. I can head into the weekend with news from Pew Research that the Jewish population is being surpassed in the USA by other groups in terms of sheer numbers. Pew writes that if current demographic trends hold, Judaism will no longer be the largest non-Christian religion in the country and, by 2050, Muslims are projected to be more numerous in the U.S. than people who identify as Jewish on the basis of religion. Muslims are forecast to make up 2.1% of the U.S. population in 2050, up from 0.9% in 2010. People who identify their religion as Jewish in surveys are projected to decline from an estimated 1.8% of the U.S. population in 2010 to 1.4% in 2050. The median age of U.S. Jews as of 2010 (41) was 17 years older than the median age for Muslims (24), while Jews, on average, have 1.9 children per woman compared with 2.8 for U.S. Muslims. Hindus, who make up another relatively young group that continues to be boosted by migration, are projected to double as a share of the U.S. population, from 0.6% in 2010 to 1.2% in 2050. Similar factors account for the modest expected rise in the share of Buddhists (from 1.2% to 1.4%).