CzechTV: Smarter Than a 5th Grader, But Are You Tougher Than Your Sudetenland Grandparents 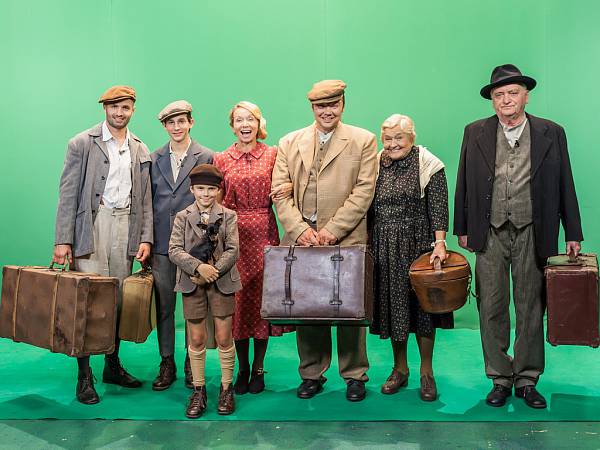 Producers at Ostrava Czech Television saw docu-reality shows like the one where a family lived like they were in post-colonial period Maine in 1852, or Schwarzwaldhaus 1902 Wartime Farm, and came upon an idea. Let’s take a family and give them a vacation cabin, and then have them wake up under Nazi occupation. As Czech Television puts it, ‘can a contemporary family withstand the conditions experienced by Czech grandfathers and grandmothers during the second world war?

Directed by J. Blohlavý, “Holidays in the Protectorate” – or Dovolená v Protektorátu- has a family live during the period of the Nazi Protectorate of Bohemia and Moravia. The episodes were filmed last summer in the rural area of Old Hamry. The family had to live there for two months; one day is idyllic, the rest of the period is during wartime.

The family (Ivana, Milda, Marek, Kuba, Honza, Jarmila, Jirí) must care for animals and are faced with food rationing. Each day there are new decrees and regulations. Tune into the wrong radio station? Expect a sanction. If neighbors inform the Gestapo about you. Big problems. Survive for two months? Win a prize.

Ivana Lustyková Docekalová (mommy), 51, is a primary school speech teacher; Miloslav Lustyk (daddy), 42, is currently ambulance drive and used to work in Miami for a hotel; Marek Lustyk Docekal is their 17 year old son, currently a student interested in filmmaking and cows; Jakub Lustyk – or Kuba – is their 10 year old son; Jan Docekal – Honza – is a 35 year old nephew of Ivana, interested in real estate and combat sports and in love with Costa Rica; Jarmila Docekalová, is the 80 year old active babicka or retired grandmother and state employee during the Communist period; and 82 year old Jiri Docekal is retired and grandpa (dedecek). In the past, he was an active hockey player for the former Czechoslovakian national team. He was also the deputy director of the Ministry of metallurgical industry, where he worked together with Jarmilou. You can see a video of the home and forest area HERE.

hmm… unusual city folk show up. Are the hiding?

The episodes include (1) Welcome to old times – the family awakens to occupation; (2) The rules of survival – Hitler has invaded, rules imposed; (3) Raids – the Gestapo is coming in the morning; (4) Hog Killing – Slaughter of the pig and the beginning of new challenges; (5) The Gestapo behind their backs – Police trap for a mysterious woman from the city. Is she a židovské/Jew seeking to hide?; (6) Secret message
– Playing with fire; (7) Step by Step – from the abyss – cooperation with the resistance means death risk; (8) Day of Reckoning – It was not until spring 1945 to determine who is defeated and who will be the winner.

Photos can be found HERE.

Lenka Poláková, the show’s creative producer, said, “Holidays in the Protectorate is the first historical docureality in Czech television. The three-generation Czech family experiences a piece of Czech history, firsthand. The spendstwo months in a remote area in the mountains – without all the conveniences of contemporary civilization, and they will have to take care of the farm and animals, feed itself from its own resources or limited purchases of food to their ration cards. They also will have to perform the duties as assigned. Holidays in the Protectorate, however, is not just a fun game. During the entire eight episodes of the storyis based on a plausible reality. Through the story, inspired by the contemporary chronicles, expert consultants, and historians, viewers will also see unique archival footage of everyday life in the Protectorate, and listen to authentic radio programs. … There is also a bit of a psychological test, as three generations of one family can survive today constantly together under one roof in tense situations. After more than two years of work on this project, I think we will all benefit from occasionally experiencing history – try to think whether you are still not able to make a living only with his own hands to survive outside the current civilization, to protect oneself and the lives of out children… and also that we have around the right people who we would be able to handle the situations.”

Milan Fridrich, the Director of Television Programs said, “Holidays in the Protectorate” is one of the contributions of Czech Television on the 70th anniversary of the end of the Second … I believe that the audience is not just interested in authenticity … but it can evoke in them a question, how would maintain themselves in situations to which the family is exposed…. I am convinced that the major task of public service television is [to bring viewers] closer to historical events, planting them [placing them] in context and showing their impact on the lives of ordinary people, not only through documentaries, current affairs and news formats, but also through innovative and experimental television shapes, such as docureality.”

WILL IT BE AS GOOD AS Poslední cyklista – 2014’s THE LAST CYCLIST?

If the show is successful, you can expect to see Polish MTV – The Real World – Warsaw Ghetto