Thanks for the Holy Seating Initiative 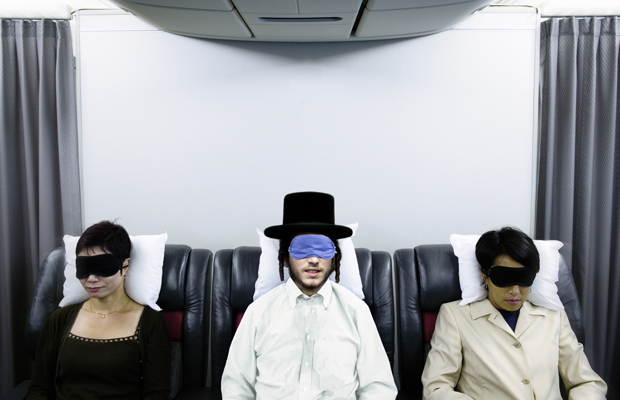 I would like to thank my Ultra-Orthodox Jewish brothers who insist on our G-d given right not to sit next to a woman on an airplane. I realize that causing two recent El Al flights from JFK to Tel Aviv half hour delays may have raised some eyebrows, particularly amongst some secular types who do not understand the grave dangers involved. But who else is going to teach the world the holy way to travel on an airplane, the Taliban!? These guys are my heroes; my Rosa Parks’. She bravely stood up for her right to sit wherever she wanted; these learned, and pious Jews are insisting on their rights not to sit where they don’t want – next to women.

Amazingly there are some ignorant anti-Semites out there who get all bent out of shape about this topic. They say that Ultra-Orthodox Jews should buy extra seats if they want to have a say in who their onboard neighbors are. If extra tickets are too costly, they think Ultra-Orthodox Jews should coordinate their travel plans and pre-book seats next to each other. These are a couple of the most biased ideas I’ve heard in a long time and highly discriminatory to boot. Do these people think all Ultra-Orthodox Jews know each other!? Why should Ultra-Orthodox Jews have to spend extra time making travel arrangements, calling and texting and whatsapping each other when all other passengers do not have to make these preparations? Additionally, doing so would take minutes and perhaps hours away from the study of Torah. As the study of Torah holds up the world, it is a very short-sighted way of looking at things and, may I add, extremely ungrateful.

Critics of the Holy Seating Initiative have it backward as usual. The idea that Ultra-Orthodox Jews do not want to sit next to women because they are afraid of their responses to members of the opposite sex is ludicrous. The entire issue is not about men at all?—?it is about women’s rights. The Torah teaches that the greatest honor for a woman is to be princess-like; reserved. Women deserve the right to preserve their royal dignity, even if in today’s day and age Paris and Fifth Avenue do their best to strip them of it. Also, we all know that women talk a lot. So if a strange man sits next to a woman she might be tempted to strike up a conversation with him and poof?—?there goes her reservedness! And THAT would be a Chillul HaShem (desecration of G-d’s name) in public— considered by many to be one of the worst sins a Jew can commit.

If all this admittedly small group of HSI (Holy Seating Initiative) Jews taught us was airline seating etiquette, dayeinu. But they do so much more! They join many other Orthodox Jews in davening (praying) with a minyan (a quorum of ten men) during flights. Being the most pious men on board, they are invariably the loudest and most vigorous in prayer and “shuckling” (swaying back and forth). Non-believers and infidels criticize this practice, claiming it blocks the aisles, makes restroom access difficult and impedes the flight crew’s ability to serve food and drink. Really!?!? These people are communicating with the Creator of the Universe, and you are worried about your bodily functions and depraved appetites for non-kosher, or at least non-bedatz, food and alcoholic beverages!? Even if you don’t believe, can’t you respect another human being’s right to worship his creator? Instead of being so selfish, here’s a radical idea. Try respecting someone who is giving up the luxury and comfort of his economy class seat in order to stand in the aisle braving angry stares, duty-free carts and turbulence to meditate and commune with G-d. And He is often much closer on an airplane, depending on the cruising altitude (this is presumably the reason the Captain announces it). Why not just give the name of a sick person to one of those praying, answer an amen and relax; it will be over very soon. What you ungrateful critics do not realize is that these incredible zealots are extremely concerned about your comfort and feel bad about getting in the way of the flight crew. So they double the speed of the prayers. The same prayers that take about 40 minutes back on the ground take only about 20 minutes in the air. They are sacrificing 50% of their communion time with the creator of the universe; just for you!

So, thanks, guys. Don’t let the naysayers get you down. Ignore those who would distract you from your Holy mission. Stand up (for as long as it takes) for your rights and don’t get rattled by those who question your motives. Do not let the fact that most (if not all) Rabbi’s have ruled that it is permissible to sit next to a woman on a plane dissuade you. Keep on publicly insisting on the highest standards of morality in airplane seating arrangements in the face of all opposition and perhaps even under threat of arrest. The very fact that you are willing to make this stand conclusively proves that you are doing this l’shem shamayim?—?for the sake of G-d in heaven; teaching the world how to be holy. B’ezras HaShem in a few years, your perseverance may cause all flights on all airlines to have mandatory separate seating for men and women. And that would undoubtedly be a large step towards bringing the Mashiach and the ultimate redemption of the world?—?bimheira b’yameinu (may this occur speedily in our time); Amen!

P.S. Out of curiosity, in a separate seating plane would the children have to sit with the women so you can study (and sleep) in peace while your wives deal with the kids’ tantrums? If so, I’m in!

Follow me!
rav shmuel
Rav Shmuel is a Rabbi who hangs out in Greenwich Village and plays original compositions on his guitar and ukulele. On the rare occasions when he is not posting artistically rendered photographs on Instagram he can be found posting random videos to Facebook. A few times a year someone holds a gun to his head and says "blog!" So he does.

Follow me!
Latest posts by rav shmuel (see all)