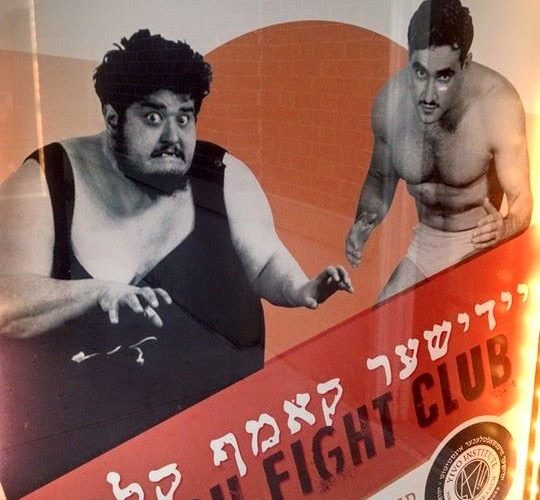 The exhibit’s opening featured beer, sour pickles, yellow mustard, and pretzels, in addition to a presentation by Eddy Portnoy, PhD, a national Jewish treasure for his knowledge on Yiddish American culture.

Dr. Portnoy explores the other side of Yiddish culture: not Fiddler on the Roof’s shtetl, not Roman Vishniac’s photos of rabbis and students, not Tevye. He studies comics, cartoons, pickpockets, prostitutes, and fights. (When a woman propositioned a man, or a thug robbed you in 1920 on the Lower East Side, the words were in Yiddish… as were the fists).

Portnoy said that prior to WWII, Jewish boxers and wrestlers were so popular in Warsaw and America, that some gentile athletes pretended to be Jewish to get larger audiences and fans. In Warsaw, where the most important fight was always between a Pole and a Jew, Hasidim were known to chant Hebrew prayers when the Polish Catholic boxers started to win against the Jewish contender. Jewish athletes were so popular five decades ago, that one could perhaps imagine that a bar mitzvah boy would want BLIMP LEVY at his party more than a modern 13 year old would want Iggy Azalea or Nicki Minaj at their party, today.

Suffice it to say that at one time, when urban Jewish street gangs and mobsters were common, that physical fights, slaps, and shoves were not uncommon, and fighting prowess was channeled into boxing and wrestling for sports, and then for entertainment.

Portnoy, a 49 year old Rutgers professor, shared cover photos from boxing magazines that featured famous Jewish pugilists, and he shared some hilarious news articles from the early Yiddish presses that reported on fights and altercations, including a story from Warsaw that had a man being chased by a woman down the street and stripped naked (they turned out to be a married couple), and a fight in a Lower East Side Manhattan synagogue over a Yom Kippur reserved seat that ended up in the Essex Market Courts during Musaf.

The exhibit stems from the Filologishe Shrift, a 300 page book published in 1926 that studied a variety of Yiddish etymologies, such as the Yiddish phrases in Estonia. One short research paper studied “Fighting Words” in Yiddish, and it contained over 100 Yiddish words for violence. The book is one of 23 million (yes 23 million) artifacts that the YIVO Institute for Yiddish Research maintains.

Words in the exhibit include
ARAYFORN (an elbow to the jaw),
KLUNG (a punch to the teeth),
KIFN (a hard hit by a juvenile delinquent),
DOYRESN (to kill, from the hebrew for ‘to trample’),
DER GEBERNATOR (The Governor, to jab a thumb into the ribs),
SHTURKH (a hit with the elbow),
TUNK (an open handed slap that gets into the victim’s mouth),
SHTAYSL (an uppercut),
TRAMSK (a powerful punch to the upper back),
KHSIME (a signature, as in putting your signature on someone’s face),
UNTERKLETZL (knee to the butt)
BARNE (like a noogie, but hard)
A BENTSCH (a blow to the head with a piece of wood, but not a bench)
and the beloved ZETZ (a quick strong hit)

In addition to Yiddish words, the exhibit briefly explores the Jewish heroes and heels of the professional wrestling rings, including BLIMP (Martin) LEVY, who was 200 pounds at his Bar Mitzvah and 650 pounds as an adult, and Abie Coleman, credited with inventing the dropkick in the ring. One famous wrestler supported his whole family through the Great Depression on his earnings, and then became a coat manufacturer in New Jersey after WWII. Blimp Levy was discovered in a freak sideshow by the wrestling promote Jack Pfefer, who created freakish personas for wrestlers.

Poster from Exhibit at Yivo

Ross was a major title winner. He longed to be a Talmud scholar, but after his father was murdered, he entered into the field of crime and then boxing. Rafael Halperin, who did not wrestle on Shabbat, fled Vienna for Israel, and was nimble at Talmud as well as ring matches. After he retired from wrestling, he moved to the nascent State of Israel and opened up a car washes