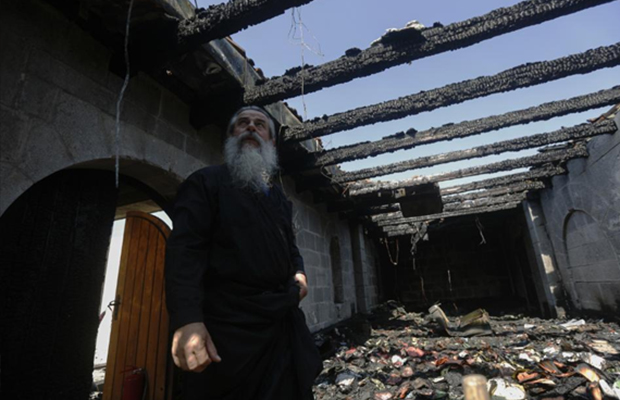 Last week, fire gutted part of the Church of Loaves and Fishes on the shores of the Sea of Galilee in northern Israel in what investigators suspect is an arson attack by Jewish extremists. The church, also known as the Taghbah Church, is where Christians believe that Jesus performed the Miracle of the Multiplication of the Loaves and the Fishes and is a traditional site for pilgrims visiting Israel. Hebrew graffiti found at the site quotes a passage from a Hebrew prayer that calls for the removal of idolatry.

A group of Rabbis, lead by Alon Goshen-Gottstein, the founder and director of the Elijah Interfaith Institute have launched a crowdfunding campaign to help pay for the work needed to fix the damage to the church. So far the campaign has raised 25% of its ?50,000 goal. Please consider making a donation now and send a message to the haters among us that as Jews, we value religious freedom in Israel and that those who would destroy places of worship do not speak for us. Every shekel counts and no donation is too small. Or too large for that matter!

Below is a recent blog post on the Times of Israel he wrote on the subject:

The Launch of Religious Jewish Terrorism
By Alon Goshen-Gottstein

Once again, a Church is vandalized by Jewish extremists. This time, however, the religious motive is more overt. Instead of “price tag”, the graffiti quotes a passage from the Hebrew prayer, appealing to the removal of idolatry. The attack on Tabgha is therefore not simply one more attack. It marks a new level of attack on Christian institutions. For the first time, Jewish sources are quoted, making the attack explicitly religious. Tabgha marks the launch of religious Jewish terrorism. 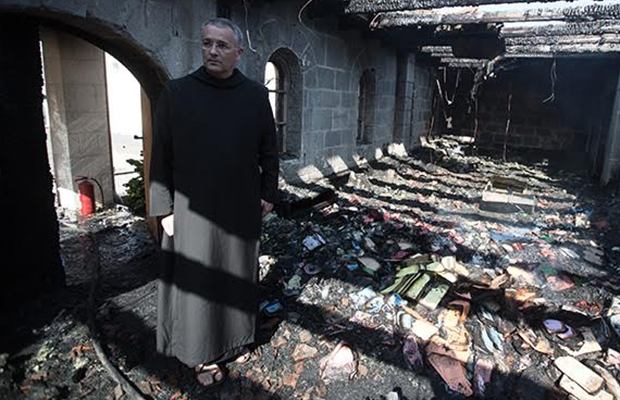 A Random Act or A New Movement?

The attack on Tabgha is not simply one more in a chain of attacks. It is closely linked to ongoing occurrences on Mount Zion. The brothers at Tabgha belong to the same community that inhabits the Dormition Abbey on Mount Zion. The monks on Mount Zion are subject to daily abuse, in the form of spitting or name calling. There has been an attempt at arson at the Dormition Abbey as well. Whether the arsonists are aware of it or not, what may be termed the epicenter of religious disharmony, Mount Zion, has sent shock-waves to peaceful Galilee.

The attack on Tabgha is the worst since the wave of attacks on Churches and Mosques began. The damage is more extensive than in any other attack on a Church. So is the exposure. Reactions by government officials were most vocal precisely because of Tabgha’s centrality. It is one of the most frequented sites on the Christian pilgrim’s route. Consider the following calculation. We can estimate 2,000 visits a day to the Church. Multiply this by the six months it will take to restore the damage, and you have 360,000 visitors to the Church who will witness the destruction. That is 360,000 ambassadors who will testify to the treatment of Christians in Israel. The damning testimony will endure long after we all move to the next item on the news. We can only wonder whether the damage will take the shape of criticizing the Jewish state or the Jewish people. The former would provide more fuel to ongoing efforts at delegitimizing Israel. The latter would undermine advances in Jewish-Christian relations.

Attacks on a Church have nothing to do with the inhabitants or their deeds. Tabgha is a model for Christian efforts at peacemaking and contribution to local society. The monks regularly receive handicapped Israeli and Palestinian youth and convene youth camps for both sides. They are non-missionary. Who cares?

Christianity is Not Idolatry

The entire affair is fueled by a view of Christianity as idolatry. No matter how much state and religious officials condemn the arsonists, more is required than just condemnation. The youth, or hotheads or extremists or terrorists – call them what you like, absorbed a certain teaching, even if they misinterpreted it. Religious leaders and educators must deal with the root problem. In the slew of responses to the attack, I noted only one single response that addressed the core issue. Rabbi Amnon Bazak of Har Etzyon Yehiva stated out and out that Christianity is not idolatrous and therefore the graffiti is not mistaken in application, but in principle. Not a single one of the official religious speakers who condemned the arson touched on the core issue. Regrettably, the view of Christianity as idolatrous is growing in prominence; once a minoritarian position, it has eclipsed other views. Rabbis must deal with the root cause of this kind of religious extremism. Is Christianity “avoda zara” or idol worship? For whom? What are the implications of such affirmation? What room is there for an alternative view? These issues are becoming matters of life and death, for Jews and non-Jews. They define Jews’ moral stature. It would seem they deserve at least as much attention as the care lavished on how to observe the shemita sabbatical year under present-day circumstances.

The appeal to idols and their removal poses yet another theological and educational challenge. What do we mean by “idolatry”? What are today’s idols? The view that Christianity is idolatrous not only ignores a long trajectory of halachic views to the contrary. It also upholds a fairly unsophisticated view of what constitutes idolatry. Judaism’s teachings are rich in their view of idolatry as something broader and more pervasive than the use of images to enhance worship. The reliance on money as a source of strength is often considered as idolatry, a theme found in the prophets and echoed in Hassidic teachings. Pursuing and relying on one’s wealth is relying on something other than God. Ideological rigidity is also a form of idol-making, teaches us the Mey Hashiloach. In short, idolatry is not only something that affects “them” – the other, the Christian; it equally affects us. Seen in this light, the arsonists were in fact guilty of some form of idolatry, making their ideology more important than God and his teaching. 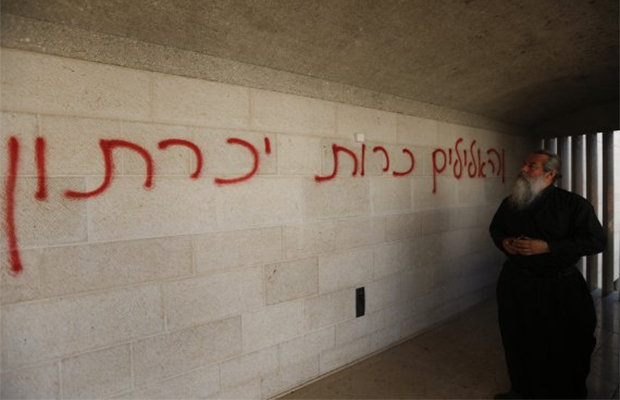 Tabgha is a Watershed Moment: We Must Act Now

There is great opportunity in the Tabgha incident. Because it constitutes a watershed point in so many ways, it provides an opportunity for a more thoughtful and engaged response to the challenge. If terrorist acts are now religious, we need to deal with them with religious and educational tools. If violence now appeals to idolatry, we have the opportunity of revisiting its meaning. If those who serve us in loving care are attacked, this invites us to consider individuals for who they are. If the problem has now grown to proportions that we can no longer ignore, perhaps we can confront the challenges in a more honest and open way. Tabgha is not only a challenge for law enforcement forces. It is a challenge for religious educators and leadership. If these are willing to recognize the challenge and confront it for what it is, something good may come out of the dark and horrific moment.