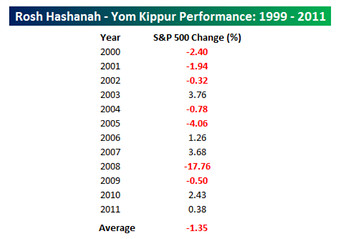 At the hallways of Jewlicious, there is the adage that one should SELL the market at Rosh Hashana and BUY after Yom Kippur, and avert losses. Did it hold true for 2015? Did the New York Stick Exchange – Dow Jones Industrial Average fall during the Days of Awe?

Some say that the period in September historically coincides with market weaknesses. In the last decade, the average for the holiday period was -1.4% (including 2008).

Me? I am just Brisket-ish?