Taubman Auction – Off To a Rocky Start 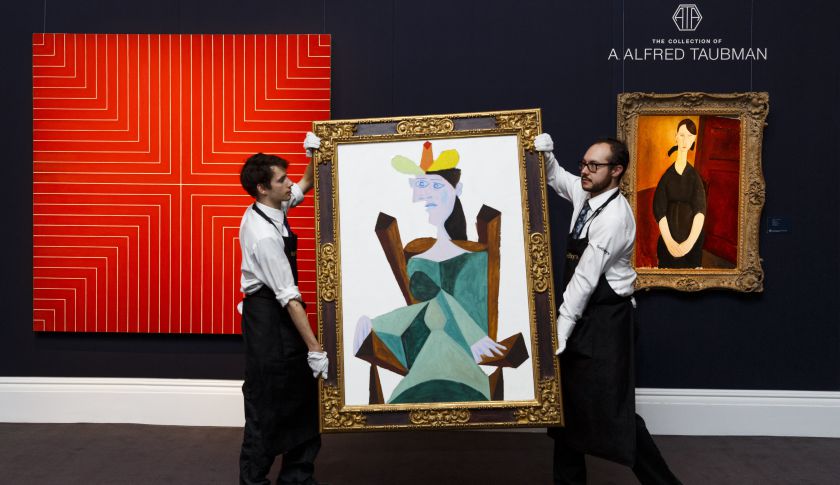 Last evening in Manhattan, Sotheby’s kicked off the first four auctions at a red-carpeted gala event. The auctions feature the art collection of the late A. Alfred Taubman, a former owner and chairman of the auction house, and famed real estate developer and billionaire philanthropist. Although the 500-lot collection was estimated to fetch $500 million, making it the most valuable private art collection ever at auction, the prices fetched last night were huge but underwhelming.

Taubman passed away earlier this year at the age of 91. Among the items scheduled for auction are Pablo Picasso’s 1938 portrait “Femme assise sur une chaise” (“Woman Seated in a Chair”), and works by Edgar Degas, Mark Rothko, Jackson Pollock, and Alberto Giacometti. ’Paulette Jourdain,’ Amedeo Modigliani’s 1919 demure portrait of his dealer’s housemaid and girlfriend, sold to a telephone bidder calling from Asia for $42.8 million. It was over its $25 million Sotheby’s estimate. But a gray-black Jasper Johns abstract, “Disappearance I,” estimated to sell for $15 million didn’t receive any bids, and not even Woody Allen bid on Edgar Degas’s sensuous portrait of a nude woman brushing her red hair after taking a bath, “Nude Woman, Back.”

Taubman was an active member of Congregation Shaarey Zedek in Southfield Michigan. His donations helped to build and support that A. Alfred Taubman Jewish Community Campus in Oak Park, which include a JCC and Jewish Senior Life apartment buildings. He donated over $140 million to the University of Michigan; and he served as vice chair of a $4 billion fundraising campaign to help the university increase student scholarships. (They could have at least made him the chair, since he was the largest single contributor to the school) Taubman also gave millions to Lawrence Technological University in Southfield; the College for Creative Studies in Detroit; and the Detroit Institute of Arts. Taubman also gave Rosa Parks a rent free apartment in one of his developments after he heard that she was assaulted in her neighborhood in Detroit

Speaking of Sotheby’s, on 17 December 2015, in New York City, it will hosting the Israeli and International Art auction. An exceptionally rich selection of works by Reuven Rubin will be included, and two superb works from the mid-1920’s The Road to Meron and Threshing in the Galilee will be offered. These works are executed in Rubin’s signature naïve style of that time. Sotheby’s will also offer one of the most celebrated works by Mordecai Ardon, The Venus of Beersheba. This work has the distinction of appearing on the cover of the Israel Museum’s retrospective exhibition, Mordecai Ardon: The Colors of Time, in 2004. In addition to these highlights, all the important movements of Israeli art are represented in this sale, including excellent examples of the New Horizons group and the development of contemporary video and photography. Sotheby’s will also feature photographs from the Shpilman Institute for Photography, including one of Ilit Azoulay’s most important works to date, a 4-part photograph entitled Room # 8, Wall No. 1. Israeli sculpture is represented by Menashe Kadisman, whose passing this year was deeply felt by the Israeli Art community, Itzhak Danziger and Siglait Landau. The International section of the sale includes works by Chana Orloff, Bruno Schulz, Mane-Katz and Joseph Isreals. People lke you and me can visit Sotheby’s the weekend prior to the sale to view the works.