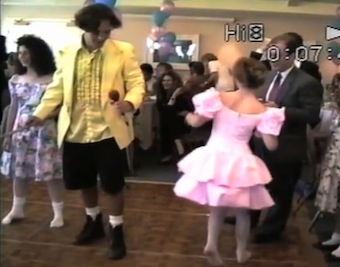 According to San Francisco based Thumbtack.com, DJ’s charge nearly one third more for a night of music and entertainment at Bar/Bat Mitzvahs than they do for weddings, and nearly double than the charge for an average birthday. No data was available for quinceaneras and brises. The Analysis was based on a bit of naval gazing at the company’s own data for the cities it serves

Six-year-old Thumbtack.com – valued at $1.25 billion – is a startup that helps people find the right plumber or personal trainer, painter, or DJ. It competes with Angie’s List and Yelp. The company says it has already generated more than $1 billion for the 200,000+ service professionals who post their skills on its board.

Do DJ’s jack up the price for Jewish families in their time of dire need based on some sort of panning for gold misperception? The analysis showed that the average price to hire a bar/bat mitzvah DJ was $812. This was nearly $300 more than the overall average cost of hiring a DJ. Thumbtack’s editors wrote that they found that DJing for a bar/bat mitzvah requires more skills than just spinning tunes. These DJ’s must know how to corral and entertain 13 year olds, get then to limbo, light candles, dance, lead contests, and do a hora. SpotlightLA, a DJing firm, explained, ” Music, while very important, is only one piece of the puzzle. Our professional Bar and Bat mitzvah DJs will keep the party rocking. Energetic and atmospheric lighting, interactive and immersive décor, and the ability to enroll your guests into a vision of the perfect event…”

Does Thumbtack have an ulterior motive for analyzing a service that is of interest to Jewish families? Are they planning a Wall Street IPO in 2016? In its latest round of funding, participants included Baillie Gifford, Tiger Global, Google Capital, and Sequoia Capital. Thumbtack stated it is not actively planning an IPO.