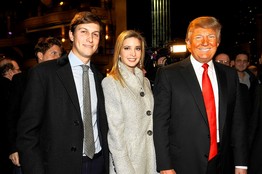 Steeped in the methods of Saul Alinsky’s Reveille for Radicals, Glenn Richter’s Student Struggle for Soviet Jewry (SSSJ), and USY’s boycott of California table grapes, I have for decades been on the lookout for a BIG SCORE — a topic or an issue where I could make a brief mark.

I don’t think it has happened yet.

But I can tell you this… if I were the son or son-in-law of Donald Trump, I would become a Muslim just to make a point.

Like a Jewish fantasia to be authored by Tony Kushner, I can imagine that I, as Jared Kushner, would announce that he (I) and his (my) family decided to convert to Islam. Maybe Kareem Abdul-Jabbar, Cat Stevens, Danny Blum, and Muhammed Ali would join me at the press conference. Perhaps we would have the current casts of Broadway’s Fiddler on The Roof on hand (a story of migration), or Allegiance (a story of xenophobic racism).

I would then end the meeting by telling dad that if he planned to ban Muslims, he would ban me and the family.

Would this change anything? Probably not. Family and politics don’t usually mix, and family is expendable when reaching for the brass ring of political office.

Well… I am not a Trump or a Kushner… it was just a fantasy, and I will have to keep searching for my big score.