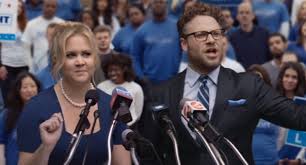 Let’s assume 500,000 Jewish households will watch the Superbowl50 from Levi’s Stadium in the San Francisco Bay Area. If a philanthropy ad played for 30 seconds, and it generated 20,000 additional contributions for $36 in 2016, and a lifetime increment of $200 from these new contributors, it still would not reach the cost of $5 million for a 30 seconds spot on CBS. Also let’s assume that the ad does not cause current contributors to increase their pledges significantly. Also, most potential contributors are agglomerated into major metros.

But if they did… I think the ads would be like these:

(1)
Eugene Levy, Larry King, and Sarah Silverman in a room deciding how much to pledge to the UJA. An image of Jack Benny complains that he can’t up his pledge. The three celebrities say, “Dude, have a Snickers. When you are hungry you are as tight as the persona of Jack Benny.” He eats and it turns out it is Mark Zuckerberg and he writes a big check.

(7)
GoPro Hero4 ad. Focuses on wearing your GoPro during your Bar or Bat Mitzvah, Under the Huppah at your wedding, or at your USY convention. Watch for the NHL’s Tomas Tatar to yell “OY!” during the SB50 telecast

(8)
Seth Rogen, Amy Schumer, and Paul Rudd unite America for Bud Lite and discuss the size of their caucus