With a Name Like Merrick, It Has To Be… 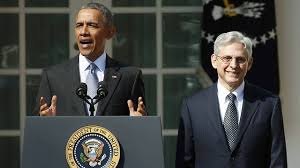 This morning at The White House, POTUS Obama nominated Judge Merrick Garland to the open seat on the U.S. Supreme Court. Amid hostile opposition from Senate Republicans, Obama nominated an older, moderate candidate – a man who, if confirmed, is not as liberal as other potential candidates and might not sit as long as other potential nominees. Garland is presently chief judge of the US Court of Appeals for the District of Columbia.

After receiving the nomination in the Rose Garden, Judge Garland, 63, discussed the honor and his Chicago roots. He also discussed his Jewish heritage, and his wife, Lynn Rosenman Garland, a fellow Harvard Law grad and a daughter of Sam Rosenman, a NY State Supreme Court judge, presidential speechwriter, and Franklin Delano Roosevelt’s and Harry Truman’s White House counsel.

“My family deserves much of the credit for the path that led me here. My grandparents left the Pale of Settlement at the border of western Russia and Eastern Europe in the early 1900s, fleeing anti-Semitism and hoping to make a better life for their children in America,” he said.

Garland, who was raised Jewish, is a graduate of Harvard Law School. After graduation, he clerked in the SCOTUS for US Supreme Court Justice William J. Brennan Jr. Judge Garland’s mother, Shirley Horowitz Garland, served as the director of volunteer services at Chicago’s Council for Jewish Elderly.

Will BKGG: Breyer, Kagan, Ginsburg, Garland be a reality? Maybe.

**
Update: The Republican Jewish Coalition (RJC) in an email criticized the appointment of the Jewish judge to the Supreme Court seat, stating that RJC leader and Cato Institute senior fellow Ilya Shapiro wrote that from his perspective, [Judge] Garland shows an alarming amount of deference to the government, and Shapiro fears that Judge Garland won’t represent the check on “ever-expanding federal power and executive actions to the same extent as [the late SCOTUS Judge] Scalia.” Shapiro also wrote that he agrees with the GOP strategy laid out by Senate Majority Leader Mitch McConnell and Judiciary Committee Chairman [Senator] Charles Grassley, namely not to consider any nominee until after the presidential election. he added, “To put a finer point on it, given how consequential Justice Scalia’s replacement will be, it would be irresponsible for the Senate to confirm any nominee President Obama may send them. ”

The National Jewish Democratic Council wrote that it applauded the choice of Chief Judge Merrick Garland. Greg Rosenbaum, Chair of the NJDC Board of Directors, stated, “We are pleased to see the president formally nominate Chief Judge Merrick Garland, whom I have known well for 47 years, to the Supreme Court. Merrick’s qualifications for the appointment are uncontestable. For 19 years he has served as a judge for the United States Court of Appeals for the District of Columbia Circuit, the second most powerful court in the nation. He was named Chief Judge of that court in 2013. Before becoming a judge, Merrick was a top Justice Department official who directed the government’s prosecution of domestic terrorists Timothy McVeigh and Terry Nichols for the 1994 Oklahoma City bombing and supervised the investigation of “Unabomber” Theodore Kaczynski. He attended Harvard Law School, where he graduated with high honors. His combination of experience shows he is eminently qualified to sit on the Supreme Court… We hope that the Senate will do its job, and move quickly to consider and confirm Judge Garland. As President Reagan said when he nominated the future Justice Kennedy in 1988, ‘the Federal judiciary is too important to be made a political football. I would hope, and the American people should expect… for the Senate to get to work and act.’ We call on all members of the Senate to do their job and consider the president’s nominee. We strongly believe Judge Merrick Garland deserves a seat on the Supreme Court and his nomination should be confirmed.”