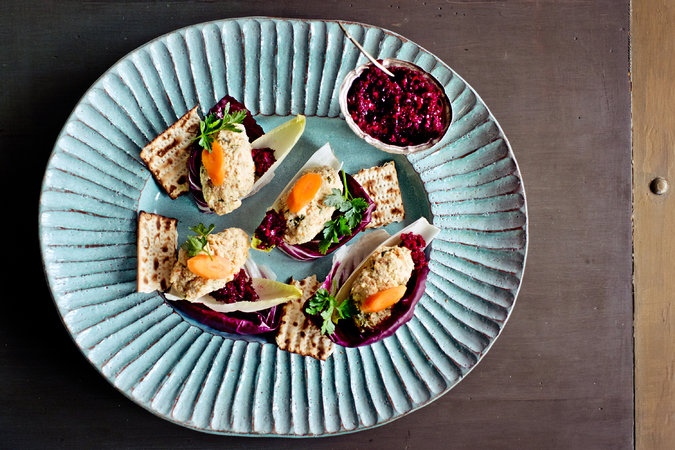 It’s here. No, not Songkran (Thai New year)… although it is.

No, it is the Wednesday before the Week Passover begins…
the day that many newspapers and blogs publish their latest takes of Passover recipes.

Where do we begin?

With JOAN NATHAN, Dean of recipes, of course. Joan starts off with Loathe Gefilte Fish? Not After You’ve Tried This Ms Nathan shares information on her annual “gefilte fish-in,” in which her posse of five friends come to DC bearing pots of whitefish, pike and carp, fish and bones, carrots, matzo meal, eggs and onions. Alas, Joan grew up with bottled fish in gel, but her mother in law turned her onto the homemade thing. She shares her poached recipe in the article.

NYT Wine critic Eric Asimov writes that a kosher for passover white Bordeaux, a combination of sauvignon blanc and sémillon, or a good Sancerre or Pouilly-Fumé, or even a Champagne or a Champagne-style sparkler from California go well with gefilte fish.

MELISSA CLARK, dons her goggles to make her own horseradish aioli (see video) and then in her NYTIMES B’tay Avon column writes about “For Juicy Beef for Your Seder Table, Look Beyond Brisket.” It is based on an Austrian style Tafelspitz, a very gently simmering (never boiled) of a chunk of rare beef.

Don’t mess with my affliction!

Writing for THE WASHINGTON POST, AMELIA SALTSMAN writes How to turn Passover’s ‘bread of affliction’ into comfort food But I like afflictions. But I realize that others need comfort. She presents a Mazzagna Verde as a way to finesse a matzoh kugel. She is the author of “The Seasonal Jewish Kitchen: A Fresh Take on Tradition” (Sterling Epicure, 2015).
The Mazzagna Verde is from Edda Servi Machlin, a chronicler of the Jewish cuisine of her native Pitigliano, Italy. Other recipes include those for a Savory Spring Leek Matzoh Kugel; a Chicken and Artichoke Matzoh Pie With Eggs and Gremolata; and a Sweet Dairy Brunch Kugel.

KARA ELDER, for The Washington Post writes about Passover recipes: Brisket, matzoh, meatless options and more An editorial aide, she lists three dozen recipes for Passover, including one for MUSTACHUDOS

STEPHEN FRIES of the New Haven Register surprises readers with a recipe for a steamed sea bass in cabbage and spinach matzo balls His secret? Susie Fishbein. ha ha. Matzo ball soup is one of his favorites and his go-to comfort food. he has prepared it the same way as his grandmother did, never changing the recipe; that is, until he read Passover By Design,” now in its 6th printing, by Susie Fishbein.

ERIC VELLEND for THE GLOBE AND MAIL in TORONTO, ONTARIO exalts in his Baked Spinach Omelette for Passover. He adapts it from Joyce Goldstein’s baked Sephardic omelette. It can be served for brunch alongside a crunchy salad of shaved raw vegetables, or as a side dish with roast salmon
* 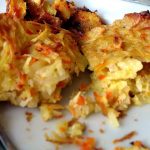 ERICA MARCUS FOR NEWSDAY (Long Island, NY) adds pomegranate seeds to her haroset while Asha Sundararaman of Park Slope, Brooklyn via Paste magazine shares ten Passover Recipes for When You’re Fed Up with Matzo. Her potato kugel is from SmittenKitchen.com and her coconut macaroons are from thekitchn.com.

In the Milwaukee Journal Sentinel, fresh from their primary elections, Joan Elovitz Kazan shares Passover with Jeremy and Amanda Ruppenthal Stein and their daughter Mirit. Their recipes include Moroccan Quinoa and Eggplant Parmigiana. Did I mention that Jeremy is a Cantor at Congregation Beth Israel Ner Tamid in Glendale, Wisconin? Some recipes – like the one for Red Roast Chicken with Lemon, Whole Garlic and Vegetables Whole Garlic and Vegetables – are from Kim Kushner, author of The New Kosher. Actually, go take a look at Kim’s flourless carrot cake HERE on her BLOG 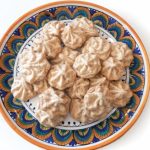 The San Diego Jewish Journal shares a recipe for a vegetarian shepherd’s pie. Tina B. Eshel snagged it from the Jewish Food Hero.

Still reading this? Park your Chevy for a second and check out Amanda Hesser’s Passover Recipe contest on Food52.com

Chef Yochanan Lambiase descends from five generations of Southern Italian chefs (though he has a British accent). He is a founder of the Jerusalem Culinary Institute and currently is the Head Chef of the Ugly Buffalo Mexican Street Grill in Jerusalem. Here is his 2016 recipe for a Mexican Lamb Burrito Wrap and Guacamole Haroset

Lisa Abraham for the Columbus Dispatch talks matzo balls. They chat about floaters and sinkers and the local recipe of Marilyn Mendelman who learned to make matzo balls from her mother, Ida M. Stewart, and grandmother, Sarah Feuer. You can purchase her “Feuer Family Favorites” cookbook at the synagogue gift shop. 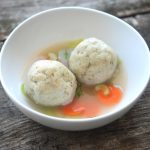 Food & Wine magazine gives NewsMiner in Anchorage, Alaska Actually it is part of the AP. Her CHICKEN MARBELLA is a winner with chicken, prunes, olives and garlic. For years, it has been her primary Passover seder dish.

*
The Forward’s Lambeth Hochwald shares a MEXICAN PASSOVER. The recipes are from Pati Jinich who is the star of PBS’s Pati’s Mexican Table, and the author of “Mexican Today: New and Rediscovered Recipes for Contemporary Kitchens.” Jinich remembers her Jewish upbringing in Mexico and matzo ball soup with jalapeños. Her recipe is for Matzo Balls With Mushrooms and Jalapeños in Broth (Bolas de Matzá con Hongos y Chiles);

Liza Schoenfein, also in THE FORWARD, shares a New Orleans Seder, Israeli Style or maybe it is an Israeli seder, New Orleans style. Israeli-born Chef Alon Shaya is rolling out a Seder menu at his New Orleans restaurant, Shaya, that riffs on his Israeli Med Jewish roots, while pulling in local Louisiana and Italian flavors. he tells Liza with a ‘z’, “I wanted to follow the traditional flow of a Passover Seder, but make each course — including the Seder plate items — unique to how we cook at Shaya.” His recipe is for Olive Oil Poached Snapper with Skordalia and Harissa

BILL DALEY (no relation to Mayor Daley) for The Chicago Tribune focuses on BRISKET. His pieceis titled, “What’s your brisket secret? Go pure and simple, or jazz it up for Passover.” He does Brisket in Five Variations. Goldberg is envious. He uses Pure and Simple brisket from Amelia Saltsman’s “The Seasonal Jewish Kitchen,” and his variations (not kosher for passover by most households are) (1) Ketchup, Dijon mustard, onion soup mix, (2) Dill pickle juice, (3) Orange juice, fish sauce, star anise, (4) Coca-Cola, ketchup, apricot jam, onion soup mix, and (5) Wood Smoke.

ELIZABETH KARMEL, for the AP’s Sioux City Iowa Journal, talks about perhaps the kindest cuts of all. Know Your Brisket Cuts. It turns out their is a second cut. It has more flavor. A whole brisket averages 15 pounds, and butchers cut it in half to make it easier to sell and easier to cook. The first cut — the lower half of the brisket — is the lean piece. The second cut – called the point – is fattier and more flavorfilled.

Speaking of Milan and Piedmont, the NAPLES NEWS has a recipe to share This Naples is in Florida. The recipe is for Spanish Sweet Potato Rice with Honey Lime Chicken (if you eat rice) from the Gellers. Jamie Geller, the Rachael Ray of Kosher, says, “Try using plantain or butternut squash rice instead of sweet potatoes. If you eat kitniyot on Passover, feel free to add a can of rinsed and drained black beans and/or corn.”

Jealous of the East Bay… the San Francisco Chronicle spends time with Patty Corwin of the San Francisco School and makes a perfect matzo ball HERE. It includes many pictures and a wondrous artistic soup and hand pics. Corwin hates kitchen waste. When she buys a whole chicken, she removes and freezes the pockets of fat she pulls from the cavity of the bird; once she’s amassed enough, she renders the fat into schmaltz, a key ingredient in her matzo balls. (She also saves the livers for another Passover signature: her chopped chicken liver.)

More after I eat a snack…..