Dizengoff Arrives in NYC – a Lost Weekend of Hummus 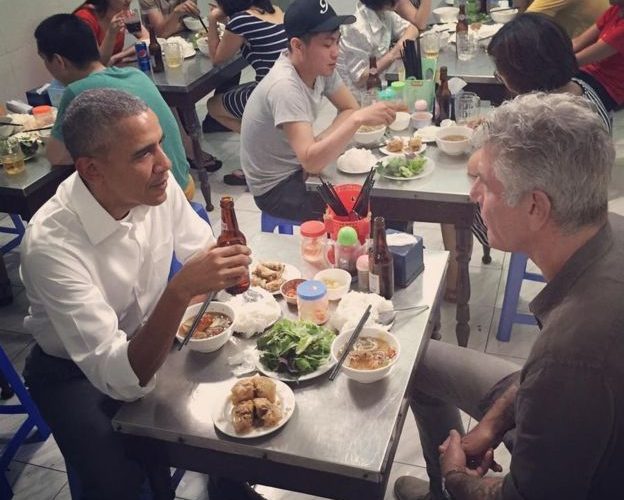 While President Barack Obama busied himself in Vietnam eating a $6 pho meal with Anthony Bourdain**, I focused my time in New York City eating hummus at a variety of locations.

I checked out the hummus at Freddy Zeideia’s “King of Falafel & Shawarma” of Astoria, Queens. Freddy – the oldest of six kids from Ramallah – achieved fame with a food cart. He moved from his food cart/truck in Queens to a brick & mortar site one block from his cart, a few months ago. I liked his pita; and his hummus was adequate. Plus the price was very economical. His “Palestinian Salad” could have been dressed better.

I also popped into Mimi’s on 14th Street in Manhattan. Jerusalem-born chef Mimi Kitani sells her famous hummus in Ditmas Park, Brooklyn on Cortelyou Road. Last Fall, she and her boyfriend, Avi Shuker, opened up two locations in Manhattan. Her hummus is twice the price as a plate in Queens, and although some swear by it,… it was just average to me.

I then settled on my secret source of hummus: Ohad Fisherman. Fisherman is a real estate broker in New York City and the scion of the Mifgash Hasteak restaurant in Tel Aviv. Fisherman uses his secret family hummus recipe to make “Joonam,” his brand of hummus that is delivered to special Jordache jeans wearing customers and sold at select groceries. Costing somewhere under Mimi’s and more than Freddy’s, it is the best I had in New York City, to date.

Until that is… until… DIZENGOFF_NYC opened in Chelsea Market***.

I have been Counting the Omer since before Passover, waiting for Dizengoff NYC to open.

Their tweets said they were opening… soon… just wait… soon… be patient.

There were delays with city permits and permissions for testing in the crowded Chelsea market which delayed the launch, week after week, but thanks be to god, they opened (soft launch) on May 23. @Dizengoff_NYC is an outpost of Dizengoff in Philadelphia, which is a cousin to Chef Michael Solomonov’s ZAHAV* and related to FEDERAL DONUTS, ROOSTER SOUP, and Chef Steve Cook’s ABE FISHER.

It officially opens Wednesday, May 25 (Lag B’Omer), but you can go now and beat the rush. Solomonov, Cook and chef Emily Seaman also serve Israeli salads, and in the morning for 90 minutes, they offer shakshuka.

I admit it. No other hummus in NYC compares to Dizengoff_NYC, and I now see why everyone raves about it.

In the video below, Chef Mike Solomonov and Restaurateur Steve Cook take an epic journey from Philadelphia to New York. Bringing hummus to the masses at Dizengoff NYC in Chelsea Market.