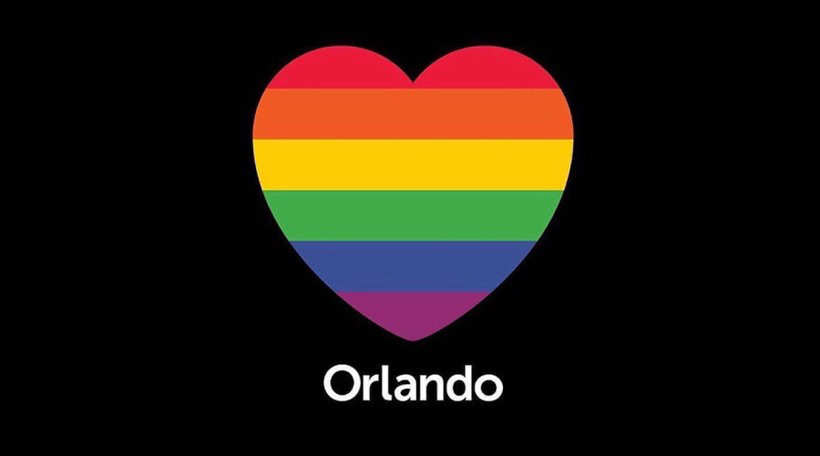 It happened less than a week after the terror attack in Tel Aviv. The Orlando attack began at 2 AM, as many Jews participated in Tikkun Leil Shavuot study programs across North America. The murderous atrocity in Orlando consumed the thoughts and actions of so many people, like no other tragedy in very recent memory. Forty-nine LGBTQ people and their friends, mostly Latino, were killed. The days since then have been marked by revelation of horrible details of the tragedy, the names of the victims, and vigils of memorial for those lives lost.

Jewish communities are heavily involved in the vigils to end hate.

At the close of Shavuot, rabbis participated in many vigils across the globe.

Rabbis Sharon Kleinbaum and David Dunn Bauer participated in a Manhattan vigil outside of the historic Stonewall Inn on Christopher Street. Rabbi Kleinbaum read some of the names of the murdered from the outdoor podium. “We reject any divisions based on faith,” Rabbi Sharon Kleinbaum of Congregation Beit Simchat Torah told the gathered. She noted the intersection of the Jewish festival of Shavuot, and the Jewish celebrate God’s gift of Torah to our people in the desert; Ramadan, the Islamic commemoration of the first divine revelation of the Koran to the prophet Muhammad; and LGBT Pride Month, a chance to celebrate the achievements and the on-going revelation of divine glory through the many identities and orientations of the LGBTQAA community. Earlier in the day, the CBST congregation incorporated the names of the Orlando dead into their Shavuot Yizkor service.

In another interfaith NYC vigil, rabbis and a Jewish community chorus stood with leaders and members from Jewish, Christian, Hindu, and Muslim communities around New York City to grieve the lives lost in Orlando (see video below).

Rabbi Kleinbaum and the Congregation Beth Simchat Torah Community Chorus at the vigil on the at Judson Memorial Church on Sunday, June 12,2016, in Manhattan

Rabbi Shmuel Herzfeld of the Modern Orthodox Congregation Ohev Sholom, in a Washington Post essay, wrote that when he and his congregants heard of the massacre at the Pulse nightclub in Orlando, he announced from the bima that as soon Shavuot ended at 9:17 PM Monday, they would travel to a gay bar as an act of solidarity… along with his mother. The DC Gay Pride Parade and Festival had just ended on Sunday afternoon. He writes that, “We just wanted to share the message that we were all in tremendous pain and that our lives were not going on as normal. Even though the holiday is a joyous occasion, I felt tears in my eyes as I recited our sacred prayers.” He, along with about a dozen members, traveled to The Fireplace, wearing their kippot. Everyone in the bar embraced each other. he writes that it was “powerful and moving and real and raw.”

In Orlando, the Jewish Federation, asked members to donate blood and to contribute to a GoFundMe campaign. They wrote that “The Jewish Federation of Greater Orlando extends our deepest sympathy to those affected by Sunday morning’s horrific terror attack at the Pulse nightclub in Orlando. We pray for the victims, their families and loved ones. The Jewish community has been impacted many times by terror attacks, and we stand united in denouncing all violence.” It sister city in Israel, wrote, “On behalf of Andrea Arbel, director of the Partnerships Division of the Jewish Agency; Haim Tzuri, Mayor of Kiryat Motzkin; and the residents of Kiryat Motzkin, I would like to extend our heartfelt sympathies on the brutal attack against innocent civilians that took place in Orlando. Please know that you are all in the hearts and prayers of your friends in Israel and in Kiryat Motzkin.” The local Hillel called upon members to donate blood.

Also in Orlando, Attorney Matt Tabakman, of counsel at the Mitchell Silver Law Firm, is coordinating dozens of attorneys who are licensed to practice in Florida who wish to provide pro bono legal help to victims and their families through Orlando’s Cebtral Florida LGBT Bar association of lawyers.

In Atlanta, Georgia, Jewish organizations joined nearly three dozen groups at the National Center for Civil and Human Rights for a vigil for the victims of the Orlando nightclub massacre and ro a rally against violence. Among them were Sojourn; Anti-Defamation League; Congregation Bet Haverim; and Lambda Legal. Rabbi Joshua Lesser of Congregation Bet Haverim was one of the main organizing forces of the evening. He said he had ridden his bike to the civil rights center earlier that morning in preparation, and pondered on the hatred and animus that was appearing in Atlanta during the coming elections.

In Birmingham, Alabama, Rabbi Jonathan Miller told his congregation that, “All of us were shocked and saddened by the massacre at the Pulse Nightclub in Orlando, Florida on Shavuot morning, June 12. Sunday evening, I visited the mosque at the Birmingham Islamic Center for evening prayers, and I was warmly and graciously received. One week earlier, I was included in a community worship service at the Covenant Community Church to celebrate Gay Pride Month. There too I was warmly and graciously received. We are suffering as a nation. Elements of our communities are afraid for their safety. As Jews who have often been targets of unfounded hatred and violence, we can empathize with every community which lives with a measure of fear and concern for their well-being.” The synagogue will focus on welcoming Muslims and members of the gay community at the Friday night service. Rabbi Miller added, “During our Friday evening Shabbat worship, we will be holding a memorial service for the victims of the Orlando Nightclub Massacre. Temple Emanu-El has extended a special invitation to the Muslim and LGBT communities to join us in worship. We will create an opportunity to pray together, remember the victims, and acknowledge the common humanity of all of God’s children.”

Hundreds of people from the South Orange and Maplewood, New Jersey met to remember the victims of the Orlando nightclub massacre — and to call for tolerance and demand action against violence. Rabbi Dan Cohen of Temple Sharey Tefilo-Israel, South Orange was among the clergy and political leaders, and North Jersey Pride leader, Jan Kaminsky, was among the speakers. A member of Congregation Beth El in South Orange, she decried “the deadly fear that inspires legislation that restricts access to bathrooms for transgender and gender fluid people and fails to protect the 52% of LGBTQ Americans whose employment can be terminated just because of who they are. Hatred takes one more than one individual, more than one bigot, even more than one incendiary politician. It takes all of us allowing that division and hatred to separate us and one another from our common humanity. Let us all stand up today and say we will not be divided against one another, we will not allow the homophobic actions of one person to dictate where we work, where we go to school, where we play.” She continued, “We will not allow the very fabric of out nation to be torn apart by hate….Together we must seize this moment to rise up…for all Americans and to say ‘No more!’”

Writing in the New York Observer, a publication based in Manhattan, Rabbi Shmuley Boteach penned an essay on how this atrocity should prompt political leaders to freeze Iranian assets.

In Chicago, Rabbi Shoshanah Conover of Temple Shalom, closed a vigil, by calling up each member of the clergy, musician, leader and politician present to join her and commit to build a world of love and recited a prayer for peace and olam chesed. (at minute 28:17 below)

Rabbi Menachem Creditor of Berkeley, California is a founder of Rabbis Against Gun Violence. he was filled with rage when he learned of the killings in Orlando. He told the Times of Israel that “You feel like you take one step forward and then you’re assaulted yet again by just an unspeakable horror.” he added, “Our souls are bound up with our Christian sisters and brothers in Charleston, our LGBTQ sisters and brothers in Orlando, and every American affected by gun violence… I think we need the opportunity to ask any members of any faith community who are not active on this issue, ‘What does God demand of us?’ Every faith person and every elected official is called to answer that question.”

The Consul General of Israel to Florida and Puerto Rico – located in Miami – sent “condolences to the Orlando community that has been affected by the tragic mass shooting. We stand in solidarity with the Florida LBGT community against this terror attack.”

NY Jewish Week reported the Bronfman Center for Jewish Student Life at New York University (NYU) sent a five-person delegation to Orlando to pay their respects. The delegation, led by Rabbi Nikki DeBlosi, an LGBTQ leader and the Manager of Religious Life at NYU’s Bronfman Center spoke at a vigil at Valencia College to honor the memory of the seven Valencia students killed in the nightclub.

JetBlue and Alaska Air, in English and Spanish blog posts, announced free fares to immediate family members and partners of the terror victims, and JetBlue donated $100,000 to the OneOrlando Fund. In Brooklyn, NY, Cobble Hill Chapels, upon hearing that one victim was visiting from Brooklyn offered the family a free funeral. In what some termed a miracle, employees of a local Chick-Fil-A – a chain that is normally closed on Sundays, and boycotted for decades by many for their anti-gay leadership – opened and made free sandwiches for people donating blood and others helping out in Orlando.

Even in the small Finger Lakes region village of Geneva, NY, Rabbi Ann Landowne of Temple Beth El led the moment of silence for the victims at their local vigil. In Sunbury, PA, Rabbi Nina Mandel helpe dlead a rally, and in Scranton, PA, Rabbi Steven Nathan joined with The Rev. Rebecca Barnes inside St. Luke’s Episcopal Church in Scranton to lead half a dozen LGBT community leaders and other clergy and hundreds of attendees in a vigil. In Columbus, Ohio, Rabbi Sharon Mars of Temple Israel on the Far East Side spoke of God’s love. “May your words of love be in our hearts as we seek to improve upon the world,” she prayed. “When we raise up our voices to insist on creating the world we wish to see, let that love seep into every pure heart across this blood-saturated and tear-drenched nation of ours. Let that love build bridges of understanding and healing.”