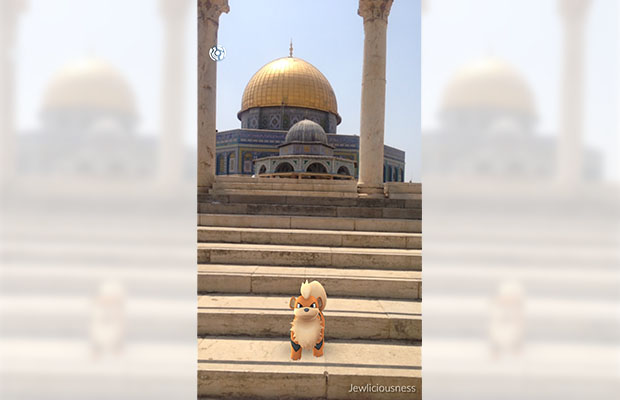 Unless you’ve been living under a rock these last few weeks, you cannot help but notice the massive success of a new game called Pokémon Go. It’s an augmented reality game that sends players out into the real world to catch Pokémon characters using their smart phone cameras and GPS tracking. In record time, Pokémon Go has notched up more users than Tinder and more active, daily users than Twitter. It has also added billions to Nintendo’s market capitalization. But with rapid success, there’s bound to be some hiccups. Already, Pokémon Go has pissed off the Jews who requested that sacred places like the US Holocaust Museum and Auschwitz become Pokémon-free zones. Particularly outrageous was an image from one Pokémon Go user showing a character called Koffing, a gas/poison Pokémon. In a museum about how Nazis murdered millions of Jews using gas chambers. Not cool. To say the least.

SOMEONE FOUND KOFFING IN THE HOLOCAUST MUSEUM IM DEAD pic.twitter.com/2v35SToUua

Niantic, the company that developed Pokémon Go has agreed to remove Pokéstops (power up stations) from a number of sensitive areas and memorials like the Holocaust museum and Japan’s Hiroshima Peace Memorial Park. The Mirror reports:

Niantic has already removed unwanted PokéStops and gyms from the Holocaust memorial museum in Washington DC… The museum’s spokesperson Andrew Hollinger confirmed that its request to the game’s makers has been granted. Niantic has now set up an an online form where specifoc locations can request to be excluded. There’s no timescale for when Niantic will review appeals, but clearly the game’s makers are aware of the real-life impact Pokémon GO is having… Other places that have banned the game from their premises out of respect for the space, include Auschwitz, Arlington National Cemetery in Washington DC, and Anzac Memorial in Sydney.

None of this prevents people from using lures and scents to attract Pokémon characters to where players are. I was at the Temple Mount the other day and discovered a potential scandal. As you all know, the Temple Mount, once home to both the 1st and the 2nd Jewish Temples and currently home to the Dome of the Rock and Al Aqsa Mosque, is administered by the Islamic Waqf. There are a number of rules when visiting the Temple Mount. Non-Muslim visitors may only enter at specific times and only through the Mughrabi gate which is near the Western Wall. Visitors must be dressed modestly and non-Muslim visitors are prohibited from bringing religious items onto the Mount and they are not allowed to pray in any way while visiting. They also cannot enter any of the Mosques. However, there is no rule against playing Pokémon and so I decided to see what was up there. Such an activity is well in keeping with the spirit and use of the area. It’s one of the few open park-like areas in the Old City and one often sees children playing and adults enjoying picnics.

The first thing I noticed was that there were no Pokéstops or PokéGyms on the Temple Mount. After about 10 minutes, I came across my first Pokémon. It was a Growlithe – a type of canine Pokémon. Now Islam doesn’t exactly ban the ownership of dogs – hunting and guard dogs are fine – but there are many Islamic scholars who believe that a Dog’s saliva and fur are ritually impure and therefor Haram. I don’t pretend to be an Islamic scholar and you can read up on this matter yourself, but this view is shared even by people who are otherwise quite fond of dogs. There have been exceptional cases of special fatwas allowing guide dogs to accompany their owners to Mosques.

That having been said, a dog, even a virtual dog, on Islam’s third holiest site, is bound to upset some folks. I haven’t heard about this issue being reported anywhere else and I hope it gets sorted out peacefully. I just want to assure all my Muslim friends, that we, the Jews, had nothing to do with this. Please save your ire for the developers or better yet, just ask them to not use dogs on the Temple Mount. I’m sure they’ll be happy to comply.