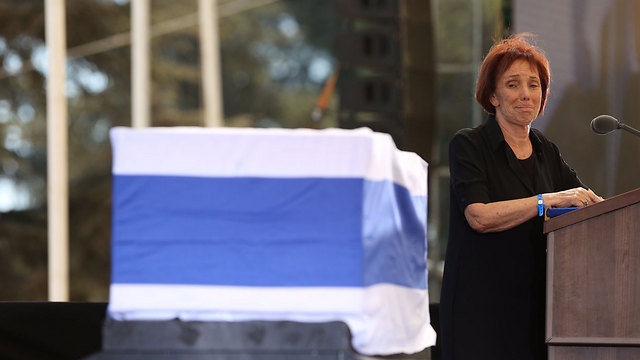 Attending a more liberal synagogue, my friends and I are used to reciting the kaddish prayer with the additional of “for all humankind” to “Oseh shalom bimromav, hu ya’aseh shalom aleinu v’al kol-yisrael” or “God who creates peace in the celestial heights, may God create peace for us and for all Israel (and for all humans, b’nay adam).” But I understand it was surprising – or upsetting – to many who watched the funeral on television in Israel. It also upset some that a woman recited the kaddish prayer.

Dr. Tsvia Walden, one of Shimon Peres’ three children, recited the kaddish with these additional words, after her father was laid to rest between the graves of former Israeli PM’s Yitzhak Rabin and Yitzhak Shamir.

It appears that even in death, Shimon Peres was able to bring transformation to a nation.

The full four hour funeral can be seen below. Including David D’Or singing “Avinu Malkeinu” as per a request made by Peres in his last will. (at 01:53:00)

In his eulogy, current PM Binyamin Netanyahu recalled a late-night meeting he had with Shimon Peres in which they argued about what should come first: peace or security. “Shimon claimed with passion: ‘Bibi, peace is the true security. If there is be peace, there’ll be security.’ While I claimed: ‘In the Middle East, security is a necessary condition for achieving peace and sustaining it.’”

After arguing this for hours, they stopped exhausted. Netanyahu said, “I saw in his eyes, and I think he saw in mine, the decisiveness that comes from deep internal conviction and from devotion to the goal: Ensuring the future of the State of Israel.” he added that he thought they were both correct, adding “In the turbulent Middle East, where only the strong survive, peace won’t be achieved unless it is supported by the constant assurance of our strength. But the purpose is not the strength, it is merely the means. The purpose is existence and coexistence, progress, prosperity and peace—for us, the people of this region.”

In his son Chemi’s eulogy, he said, “You never spared your energy, and it never waned. You made the most of every moment in your life, up to very the end. We will remember you as one whose greatness stemmed from a deep passion to serve a great cause, and not out of a desire for power.” He concluded, “Farewell my teacher and mentor. Farewell beloved father and grandfather. We will travel the path of light you left us.”