As Israel Burns, Nature Gets Even With Us 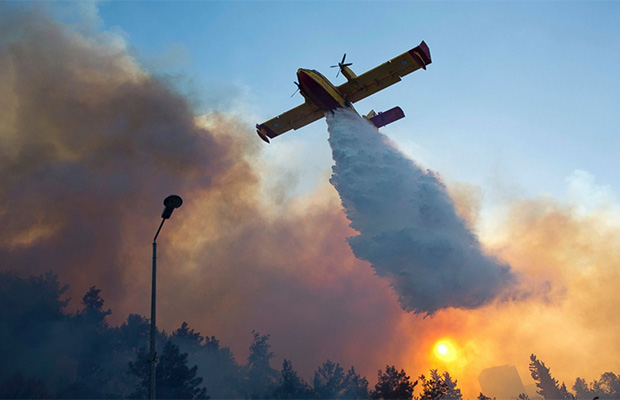 The past few days, some people have focused on terrorism, “arsonist nationalism” and have said Palestinians have started fires across Israel. Many re-posted pictures from social media showing Arabs celebrating the destruction of forests and homes around Israel (I myself did this without a drop of thought or shame). However, others focused on the fact that many Arabs – especially in Haifa – have been displaced from their homes and that the Palestinian Authority sent firefighting teams to help combat the flames as well. While both sets of facts are true, which events you choose to focus on and place in your political foreground says a lot about the narrative through which you experience the conflict.

Yet only in the PA media, as pointed out by a Palestinian friend of mine, has the question, “What caused the fires to spread so fast in the first place?” been truly asked. Israeli media has mentioned “dry conditions” and “heavy winds” – but is that really enough? Has anyone stopped to consider what we have been planting and growing for decades in our forests?

Palestinians have pointed to the JNF-KKL (Jewish National Fund-Keren Kayemet L’Yisrael) as the main source of the problem. For years, the JNF-KKL has been criticized for planting NON-INDIGENOUS SPECIES OF PINE TREES all around the country. While fast-growing and beautiful, these trees are also extremely flammable (even as the JNF-KKL switched to the more indigenous Aleppo or Jerusalem pine, some argue that the over-planting of pine and replacement of other natural species has created “ecological deserts” and has significantly changed the species assemblage of these regions).

When I was just 10 years old, I was on a trip with my father in Israel. We planted a tree (non-pine) in the area between Ofra and Amona. In the New Jersey home we lived in at the time, there’s hung a framed picture of a “deed” of some kind from the JNF. When we got back to the states, I asked my father about why it was hanging in our house. He told me that the JNF’s goal was to make sure that land in Israel was “owned by Jewish people” and that they “also plant a lot of trees.” Then he said something interesting: “I’m actually not sure they’re doing good work. I’ve heard reports that they aren’t planting good trees.” My mom said, “Actually honey, from everything I’ve read, they’re over-planting pine trees. I wonder what sort of effect it will have…” (My parents were always aware of indigenous plants and animals vs. invasive species. Today, Mom is a Florida Master Naturalist, as well as an avid birdwatcher in here Israel.)

The Jewish people have strict rules and science for living in the Land of Israel and dealing with the land itself as part of our ancient way of life. These rules include, for example, letting the land rest once every seven years and special prayers for rain or dew. We also have an awareness of indigenous species, such as wheat, barley, grapes, figs, pomegranates, olives, and dates. (My father still hangs native species decorations in his sukkah each year.) Our Talmud even debates whether one should say grace on food not grown in the Land of Israel or if one is not living in the Land of Israel:

Palestinians might not have traditions like Tu b’Shvat (the New Year for the Israeli trees) or terumah and ma’aser (tithes) for the priests or the poor from food grown in this land, but that doesn’t mean they don’t care about the land: it just means they lack the special science our sages provided us with.

The history of the JNF-KKL is complicated, with projects all over the Land of Israel (including in the West Bank, Gaza, and even in the new Palestinian city of Rawabi). What began as a Diaspora project/organization was eventually taken over by the State of Israel. Yet when it comes to our basic understandings of land ownership, we have still not fully returned to our authentic, land-based culture. We have ignored not only the land’s natural and scientific laws, but it’s societal and spiritual guidelines; instead favoring a blend of Western capitalist and socialist bureaucracy, a broken political system, and widespread corruption.

The number one cause for Jews leaving Israel today (or not coming in the first place) isn’t terror or bureaucracy or challenges in culture or learning Hebrew: it is economics and the cost of living, including renting or purchasing a home. For the Palestinians, the JNF-KKL has dispossessed them of thousands of dunams of land and reshaped the landscape with non-indigenous species of trees. For Jews, the JNF-KKL – which currently controls 600,000 acres of land (nearly 13% of Israel) – has set the stage for our present-day skyrocketing housing prices, keeping many people from moving here and forcing many to leave.

When we fail to plant native species and adopt colonialist policies, the land will react. When we ignore our roots and allow for an enormous bureaucratic organization to control enormous portions of our land, the land will react. If we fail to take a more nuanced view and remain blind to the fact that it isn’t about Israelis and Palestinians, but about living naturally and in line with our people’s ancient values, nature will get even with us. As Jews, we were provided with the exact guidelines for how to manage our land and IF someone sets our home on fire, yelling about Palestinian terror or anti-Semitism is missing the point: we have to look inward. The Jewish people are a native people here – it is time we started behaving like it. Rather than turning to Russia and the United States to put out our fires, we need real leadership to put out the fires of our social fabric and damage to our ecosystem. Otherwise, nature will get even with us.

Looking at man’s relationship with nature provides a fresh perspective. I want to thank my mother, a woman deeply in touch with both Florida’s and Israel’s nature and ecosystems, along with Professor Amnon Kartin and Rabbi Yehuda HaKohen for providing me with the skills and motivation to ask deeper questions and look for nuance in both global politics and in the combined Israeli-Palestinian narrative.

Guest post by Shalom Isaacson; Shalom is an American-Israeli living in Jerusalem, he studies Emergency and Disaster Management at Tel Aviv University, and loves yoga.