Miracle of miracles, Obama said, people thought his presidency would last only a year, but it lasted 8 years.

POTUS Barack Obama – along with the JLOTUS (Jewish Liaison of The United States) hosted an early Hanukkah Party this afternoon. A stream of the afternoon event can be seen below.

The President quoted from Isaiah and Elie Wiesel (Hanukkah in Auschwitz? Hanukkah ESPECIALLY in Auschwitz).

KOLEINU, Princeton’s a capella Jewish singing group, performed at the party. As POTUS Obama said, Koleinu might be the next best thing to come out of Princeton since… his wife, Michelle. Maybe Modern Family actor @Nolan_Gould (Luke) – who was present at the party – could be enticed to apply to Princeton.

Rabbi Steven Exler of the Bronx (Riverdale), 36, spoke at the afternoon event. Exler descends from over seven generations of rabbis. he is the senior rabbi of the Hebrew Institute of Riverdale-The Bayit and a graduate of Yeshivat Chovevei Torah Rabbinical School 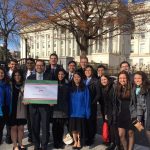 Princeton Koleinu at the @WHiteHouse 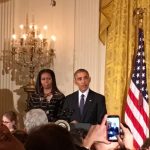 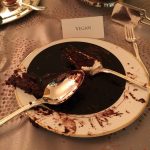