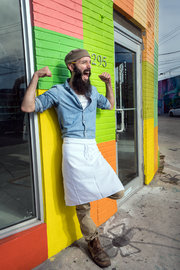 It was just two weeks ago when The Wall Street Journal
reported on the plan to restore part of the ancient Jewish catacombs under Rome’s Villa Torlonia. The government will allot €1.4 million (about $1.5 million) for the project that Claudio Procaccia, director of the Department of Jewish Culture of the Jewish community of Rome, calls “extraordinary.”

And now, last week, the WSJ has taken a look at what a good buy flats are in the old Jewish ghettos or neighborhoods of Europe, from Rome and Barcelona to Krakow’s Kazimierz and Berlin’s Scheunenviertel . In this video of Old Jewish Quarters Draw Modern Home Buyers and the story by Katy McLaughlin, we learn that properties in old Jewish areas are appreciating in value rapidly. Perhaps like olive oil futures. Speaking of which, the article interviews Mr. Enrico Colavita, president of Colavita, an olive-oil producer, who bought a flat in Rome seven years ago, and just helped his son and heir purchase a $2.1 million, three-bedroom apartment in the Jewish quarter. “They live in a way I used to live with my grandparents.” (Note: Do not confuse ColaVita Olive Oil with Yotvata Dairy Choco Milk)

If only those Jewish residents could have stayed in the quarters in Krakow, Berlin and Rome… they could have now made a killing in real estate.

Speaking of Rome, and lasagna, The Washington Post profiles a pay what you wish restaurant in Philadelphia. Mariana Chilton, a professor of public health at Drexel University (and graduate of Harvard and Penn’s famed Folklore and Folklife program) founded the restaurant which let’s customers pay more or less than the bill of fare. It is run by Philadelphia restaurateurs Marc Vetri and Jeff Benjamin. Marc got his start working at a kosher caterer. Now they own several eateries in Philadelphia. EAT, which stands for Everyone at the Table, opened in October 2016 as one of about 50 experimental restaurants across the country that are transforming the way people think about food assistance and charity. In some American cities, the concept has run afoul of neighbors and local laws and some have become “toast,” but in Philadelphia, the concept is going well so far.

Speaking of toast, The New York Times’s Florence Fabricant reports from Miami on “Step Aside, Avocado Toast. A Glatt Kosher Deli Opens in Miami.” Zak H. Stern, a.k.a. Zak the Baker, opened a glatt kosher deli a few days ago. It features corned beef on Mr. Stern’s Jewish corn rye (probably Jewish style corn rye, the bread is not actually Jewish by birth). he got inspiration from Will Horowitz’s Ducks Eatery in Manhattan’s East Village. Stern apprenticed in Israel. He started baking four years ago and sold his breads in street markets. His chef, the daughter of Cuban immigrants to Miami, is Melissa Sosa.

Speaking of Keyser Soze, Brooklyn and New York City residents and police are on the lookout for a gun toting maniac in a gold colored Cadillac Escalade who threatened to shoot a man and others because he was delayed when the man was helping Jewish people cross the street. While in Moscow, Jews are on the lookout for the deputy speaker of the Russian parliament, Peter Tolstoy, who said that Jews are to blame for injuring Russian churches and promoting persecution of christians.

Regarding persecution, remember that story about a historically Jewish golf club in the DC metro area that was going to reject Obama from membership? Well, the machers at the club have shutdown the other machers who didn’t like Obama. According to The Forward and JTA, the Woodmont Country Club invited former President Barack Obama to join. In an email to club members on Monday, (… members pay an initiation fee of $80,000 and annual dues of $9,673, maybe just a little higher than Rockville, MD, synagogue dues….) Woodmont President Barry Forman said that after “many hours in recent weeks considering this matter and the views of our members,” the club’s executive committee decided to invite [former President Barack] Obama to join… Given our legacy, it is regrettable that we have now been widely portrayed as unwelcoming and intolerant, because that is not who we are.” I guess those who are so upset that they plan to resign rather than see former President Obama on the golf course can divert those annual dues to an Israel-focused philanthropy.

Speaking of Washington, DC, newly inaugurated President DJ Trump is expected to sign an executive order halting the admission of Syrian refugees into the United States. It is expected that he will also cancel visas from a selected list of majority-Muslim countries. Reuters reports that the listed countries will be Syria, Iraq, Iran, Libya, Somalia, Sudan and Yemen. (But Saudi Arabia is okay). This is an “odd list,” says Micah Zenko of the Council on Foreign Relations. It omits seven of the top eight countries by terror attacks last year: No. 2 (Afghanistan), 3 (Pakistan), 4 (India), 5 (Nigeria), 6 (Egypt), 7 (Philippines), and 8 (Bangladesh). He added that it’s “especially odd to close off [the] U.S. from select states, because it’s irrelevant to what U.S. officials say is the number one threat…homegrown violent extremism.” Smithsonian magazine pointed out that in 1938, many American policy makers rejected Jewish refugees, since some might secretly be Nazis. As Ishaan Tharoor noted in The Washington Post in November 2015, Americans were overwhelmingly opposed to taking in Jews fleeing Nazi Germany. A 1938 poll found nearly 70% felt America should bar them from entering. Just 5% thought America should expand immigration quotas to let them in. Tharoor notes that just as New Jersey Gov. Chris Christie said in 2015 that he wouldn’t allow even “3-year-old orphans” into his state, a 1939 poll found that 60% of the public opposed taking in 10,000 mostly Jewish children who were fleeing Hitler. Just as polls a few years ago showed that over half of the American respondents wanted to deny children fleeing Central America from the United States.

Speaking of children, there are fewer Jewish names on the list of 300 semi-finalists for the Regeneron Science Talent Search (formerly named for Westinghouse and Intel). Can this be a leading indicator to fewer Nobel Prizes? The list can be found HERE Included in the list of schools is a student from the San Diego Jewish Academy and one from Kohelet Yeshiva High School in Merion Station, PA. In my extremely UNSCIENTIFIC and mildly racist review of the list, I see one Katz, a Goldman, a Cohen, and a Levy. Okay, let me be frank. About 16 blatant potential MOT’s. This compares to 2 Chang’s, 4 Gao’s, 5 Hu or Huang’s, 6 Kim’s, 14 Li or Lee’s, 8 Wang’s, 8 Zhang’s and 5 Chen’s. But I jest.

And speaking of rabbis, the Rabbinical Council of America (RCA) issued a statement last week on their “2016 Resolution: Regarding the Seating of Men and Women on Airplanes” which was adopted by direct vote of the RCA membership. It states that since some Jewish men who identify as Orthodox Jewish, on their own or with the assistance of airplane personnel, ask women to move from their pre-assigned seats so that these men can comply with their view that Jewish law discourages or prohibits them from sitting next to women; and, since some women (including Torah observant Jewish women) who are asked to move for this reason from seats they have paid for and chosen, consider such a request inherently offensive and resent having to determine how to respond to it as well to the social pressure it creates upon them to accommodate such a request; … that the RCA DECLARES that the proper norm, when in an airplane, is to comply with the ruling of leading decisors of Jewish law (including R. Moshe Feinstein; Iggerot Moshe, Even Ha’ezer 2:14) that Jews are PERMITTED to sit next to a member of the opposite sex who is not a relative even when this unintentionally causes physical contact between them…. AND THAT ALSO…. One may also assent to such a request if it is made unobtrusively and COURTEOUSLY, according to one’s best judgment of the immediate situation.