SUCH A TEMPEST IN A SHOE BOX!

Conal International Trading Inc., a Los Angeles area importer and distributor of footwear, created a blitzkrieg of contempt and ridicule when a Reddit poster (ein Redittor) posted a picture on Imgur showing the Polar Fox military style boot alongside the “impression” it made when worn… that of a sort of swastika.

Conal has since issued a letter of apology, initiated a recall, and stopped selling the boot with the offensive tread on Amazon.com

It was listed as a buy-of-the-day and a “must have” on a neo-Nazi website, the Daily Stormer (you thought I was going to say Breitbart, didn’t you?). (The Daily Stormer is the alt-right website without editors with Jewish wives) 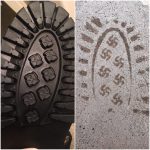 To me, the design on the boot’s sole looks like four swirling flower petals.

Conal wrote, “We would like to issue our sincerest apologies to our customers and to anyone who was offended by the Swastika imprint that the boots left behind. The design was not intentional and was a mistake made by our manufacturers in China. There was never any intention to include any offensive designs on the products we import. We will be investigating the issue…. Conal International Trading, Inc. does not promote hate or discrimination of any kind. Again, we deeply regret that this item caused offense and apologize for the mistake.”

According to Footwear News, the Polar Fox JAMES men’s lace-up cap-toe military combat boot originally retailed for $69, but had been reduced on to about $40.

The recall did not stop posters on various sites from adding jokes to the boot’s listing, reviews such as “Heily Recommended,” “Nein out of Ten,” and perfect for “marching into Poland.”

But wait… Polar Fox boots?… Wasn’t Arctic Fox (Polar Fox) or “Polarfuchs,” the operation code name in 1941 in which Nazi German and Finnish troops fought against the Soviet Northern Front defenses at Salla, Finland? The campaign was part of the Operation Silver Fox (Silberfuchs) which aimed to capture Murmansk.

Maybe I am wrong… and it wasn’t just a design error. Hmmm.

Note: The other Polar Fox styles, including the ELIJAH, JONAH, EUGENE, CURRY, EVANT, and HARRISON styles (but not the XANDER) all use a different “starburst” sole impressions… So…. me thinks the new sole design was perhaps not actually an error.

Sole design for all other boots below: 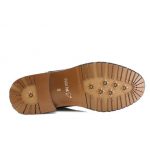