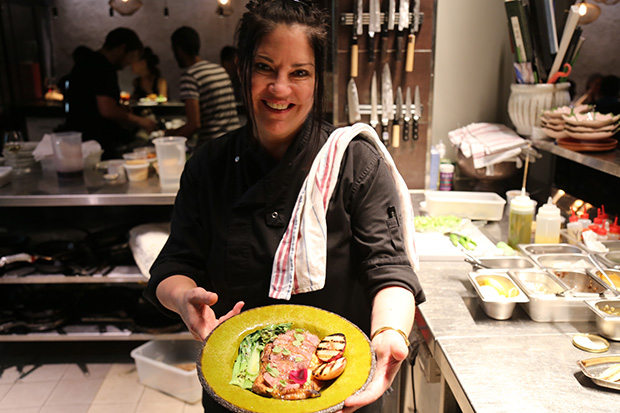 Join us as we visit epic sites in Israel that are a little off the beaten path!

We can’t write about Tel Aviv without touching upon some of the world-class culinary wonders that now pepper the city. Oasis, located at 17 Montefiore Street, stands out among the pack of trendy Tel Aviv eateries.

Oasis is the singular expression of chef and owner Rima Olvera’s experience, creativity, and vision. There is no set menu — offerings depend on what’s fresh and available at the market that day. When we visited, Olvera was preparing wasabi to add to one of the restaurant’s dishes. She used a wasabi root brought over from Japan by one of her friends. When that runs out, she told me, “No more wasabi ‘til someone else brings me more!” (Easily available powdered wasabi was obviously not an option.)

The cuisine at Oasis is eclectic, infused with an international palate of flavors, each item identified by the airport code of the dish’s ostensible origin. But don’t call it fusion. The dishes are informed by, but not beholden to, their origins. Olvera creatively mixes ingredients to produce meals that are fanciful, evocative, original, and absolutely delicious. Diners are well served by placing their trust in Olvera’s keen culinary instincts. It helps to be daring and to eschew the safe and ordinary when ordering at Oasis.

During the course of our visit, we were able to watch Olvera prepare a number of dishes, many punctuated with her signature touches of whimsy; a dish might include a flower petal, a gold leaf accent, or exotic ingredients culled from her own garden. We ordered “Vietnam,” crispy-skinned sea bream fillets served with a French colonial-era-inspired shallot, lemongrass and black pepper caramel on a salad of glass noodles, mint, coriander, and fresh lime. Also sampled was “Paris” — grilled, crispy-skinned duck breast with black pepper French toast and a violet confiture.

Oasis’ take on the ubiquitous Israeli pargit (spring chicken) is a layered dish served with black rice cakes, endives, Olvera’s own Nam Pla fish sauce, fresh squeezed lime juice, kaffir leaf caramel sauce, topped with shimeji mushrooms and asparagus cooked in sake. Olvera’s fish taco betrayed her California roots to great effect, while her tea-infused, risotto-battered fish filets were delicately flavored and immensely satisfying. Complementing dinner was a wine list that included Israeli wines available exclusively at Oasis. Olvera proved to be a wonderful hostess, even sitting with us for a spell and regaling us with her culinary adventures.

Visit www.israel.travel for more info on travel in Israel