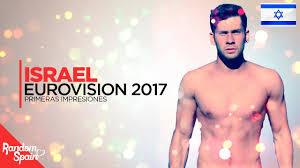 In My Humble Opinion (IMHO), Israel’s entry to Eurovision 2017 was among the best five. International voters however, placed Israel as 23 out of 26 finalists.

The winner of Eurovision 2017, which was hosted in Kiev, Ukraine, went to Salvador Sobral of Portugal. He eerily sang, “Amar Pelos Dois,” in a neo-Edith Piaf style, complete with peculiar body and strained facial movements. Bulgaria received second place and Moldova showed with third. In 2016, Israel ranked 14, and in 2015, it ranked ninth. Israel has won three times in the history of the music contest

See IMRI sing I FEEL ALIVE, below. He was a backup singer for Israel at Eurovision in past telecasts, and has been singing pop songs (Queen) since the age of two.

Israel, which is not part of continental Europe has been a part of EUrovision via the Israel Broadcasting Authority (IBA). But since that channel and public corporation was dissolved this month by the Israeli government, Israel might no longer participate in the contact, unless a new channel applies for membership. Ofer Nachshon, who has announced Israel’s vote tallies live on the Eurovision telecast each year since 2009, used his live time to mourn the closure of his employer and say it would be Israel’s last time on the show (at least via the IBA). He said “For the past 44 years Israel has participated in the Eurovision song contest, winning three times. But tonight is our final night, shortly IBA will shut down its broadcasting forever. So on behalf of all of us here in IBA, let me say thank you Europe for all the magical moments and the beautiful music…. and hopefully we shall meet again in the future.”

By the way, Israel top votes went to Portugal and Sweden.