I have explicity targeted Jews and Jew “lovers” and let Facebook’s artificial intelligence do my JewDar work for me.

But you can also target people who like the Nazi Party, as well as… as Propublica points out, “Jew Hater,” or people who wonder why Jews ruin the world, or Arsonists who hate Jews.

ProPublica – the investigative news group – placed ads using Facebook’s self-service ad and audience targeting system aimed at people who are not fond of the Jewish people. Spending $30 (why not $36??) Julia Angwin, Madeleine Varner and Ariana Tobin of Propublica promoted three posts on Facebook with the anti-Jewish target. Thirty bucks bought them a targeted audience of 2,300. With such a small target, the Facebook system suggested that the ProPublica team add groups like those related to “Hitler,” “Hitler did nothing wrong,” and the Polish word “Antysemityzm.”

Of course, no one at Facebook created these psychographic targets. Algorithms did. (when in doubt, always blame the machine)

Facebook has altered its system to reduce this from happening. 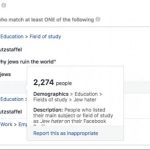 Rob Leathern, Dartmouth grad and product management director at Facebook, said that the offending targets were removed. He told media outlets that Facebook knows it has morefixes to do and that Facebook is building “new guardrails in our product and review processes to prevent other issues like this from happening in the future.” Mr. Leathern added that Facebook does not allow hate speech and “Our community standards strictly prohibit attacking people based on their protected characteristics, including religion, and we prohibit advertisers from discriminating against people based on religion and other attributes.” As you may recall, a few years ago, when Leathern sold his Optimal Inc. company to Brand Networks for $35 million, he said he was leaving advertising. Ooops.. guess again.