Some NYC Parents Angered by Judah Macabee & Other Picture Book 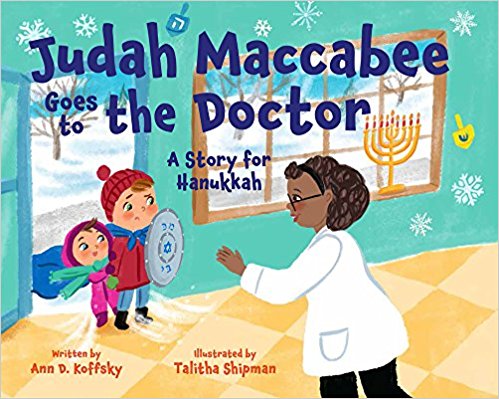 What a week for important news. Charlie Rose (not an MOT)… Glenn Thrush… Jeffrey Tambor… and the passing of teen heartthrob David Cassidy, who influenced the hairstyles of countless blow-drying teens in Jewish youth groups and summer camps in the 1970’s.

And in other breaking news… some mothers are protesting the sale of a new Hanukkah picture book Judah Maccabee Goes to the Doctor by Ann D. Koffsky, with Illustrations by Talitha Shipman from the beloved Apples and Honey Press.

In the children’s picture book, Judah is frustrated. Unlike Portnoy, his complaint focuses on his young sister Hannah. She is a mere baby, and she knocks over his tower of blocks and follows him around. On the first night of Hanukkah, Jduah’s grandmothers gives him a shield as a present and tells him the story of the Maccabees. Judah uses it to protect his baby sister. As the eighth night of Hanukkah approaches, Judah’s father takes him to the doctor for a shot. He doesn’t want it, but his father and physician convince him that he should conquer his fears and that a shot is like a shield.

Some parents who abhor vaccinations are angered by this Hanukkah book. They feel it is not a story of fears and shields, but a ploy to get children vaccinated against viruses and diseases. They think the book is a plot by pharmaceutical companies and physicians to bully children into being vaccinated. While the book is not a front for the medical profession, the author did come up with the idea of the book (one of nearly three dozen she publshed) after she heard about a Jewish day school in West Hempstead (Long Island), New York, where parents were opting out of having their children vaccinated “on religious grounds,” which she thought were a distortion of Jewish and Torah values.

And in other news from the world of picture books, an alphabet book – “P is for Palestine” – has angered many New Yorkers and led to a letter to a bookstore from a leading Manhattan rabbi. “Book Culture,” a popular bookstore on Manhattan’s Upper West Side, helped to fund a picture book and hosted a book reading. Written by Ms. Golbarg Bashi, a Pace University history professor and former Rutgers Iranian-studies instructor, “P is for Palestine” tells a story for each letter of the alphabet, such as “A is for Arabic, the fourth most” sung language on the planet. In the past, Professor Bashi called Israel an apartheid and racist country. In the book, with her page on “I is for Intifada” she celebrates the intifada which slaughtered civilians in Israel. While a member of JFREJ (Jews for Racial and Economic Justice) was at the book reading with his daughter and enjoyed the book, he does not appear to be in the majority. 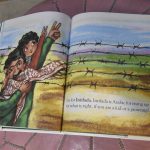 Rabbi Ammiel Hirsch of Manhattan’s Stephen Wise Free Synagogue wrote in an email to the bookstore demanding that they publicly rescind their support of “P Is for Palestine,” or the synagogue will cancel its upcoming book fair featuring Book Culture in December. Rabbi Hirsch wrote: “Of particular concern to me is the glorification of the Palestinian intifada — a cruel, murderous, and terroristic campaign that purposely targeted innocent Israelis, including children, in restaurants, buses, hospitals, schools and shopping malls. The book states that “I is for Intifada, Arabic for rising up for what is right, if you are a kid or grownup!” The illustration shows a child on her father’s back in front of a barbed wire. The intifada was not “a rising up for what is right.” It was a mass descent into immorality. Our synagogue, Stephen Wise Free Synagogue, is scheduled to host a book fair featuring Book Culture on December 7, 8, and 10. Please clarify your views on Dr. Bashi’s book on your blog or in a public statement and share this with me. If you still stand by your sponsorship of P is for Palestine, we will be unable to accommodate your participation in the book fair. I would be pleased to meet with you or speak by phone, whatever is most convenient for you. Since our book fair begins December 7, if I do not hear from you by Monday, November 27, I will assume that you stand by your endorsement of the book.”