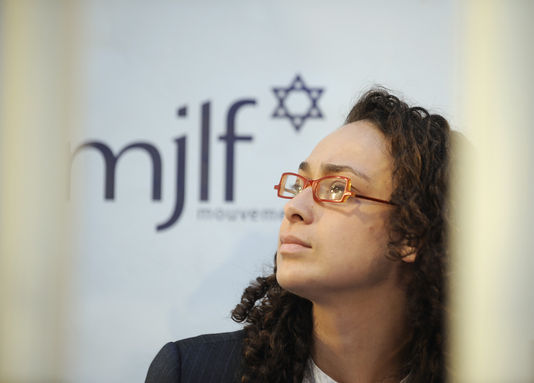 There are only three female rabbis with pulpits in France. The Washington Post reports on one of them: Delphine Horvilleur (pictured above) She remains unrecognized by France’s central Jewish authority (Consistory) and she receives regular threats. However, her congregation loves her, and she is the author of the newly published “1,001 Ways of Being Jewish or Muslim” (Des mille et une façons d’être juif ou musulman – Dialogue) with Rachid Benzine.

Speaking of Paris, JTA editor Andrew Silow-Carroll reflects on whether the Jewish presses should write about the sexual harassment allegations against the celebrities who happen to be members of the Jewish faith. He asks whether it a “Jewish story” or just stories about some men who are Jewish. He walks readers through the questions he asked his editors as accusations against Harvey Weinstein; James Toback; Leon Wieseltier; Mark Halperin; Brett Ratner; Jeffrey Tambor; Senator Al Franken; (Michael Oreskes, Andrew Kreisberg), and Glenn Thrush erupted.

Speaking of casting a light on Jews, a new museum opened in Washington, DC, and it has an exhibit that features a live Jewish man. Visitors can watch an Orthodox Jewish scribe as he writes a Torah scroll. Rabbi (Attorney) Eliezer Adam hails from Beit Shemesh in Israel. Every hour, he chats with spectators for 30 minutes and writes for twenty. The $500 million museum opened last week and was funded and created mainly by Steve Green, an heir to the Hobby Lobby chain of stores and a devout Christian. Many of the artifacts in the museum were antiquities that were purchased in Israel and other Middle Eastern countries; some of which have questonable ownership. (If you are jazzed by the Bible and Washington DC, read the RetroPolis column on Jefferson’s Bible (which is in the Smithsonian Museums, not the Museum of the Bible. jefferson cut and pasted together his own New Testament and relied on it in his later years HERE.

And on the subject of church and government separation… a U.S. federal judge threw out a lawsuit that challenged a Mercer County, West Virginia public school that was teaching 30 minute and 45 minute courses in the bible. But since the “Bible in the Schools” classes were suspended for 2017, the judge ruled that there was no longer a reason to act. The plaintiffs argued that the courses violated the 1948 U.S. Supreme Court decision in McCollum v. Board of Education.

Did someone say violation? Alexis Soloski wrote a theater review of “Diaspora” in The New York Times. The play by Nathaniel Sam Shapiro is called a “muddle of a play” that trades in stereotypes of the frat boy, princess, and stoic soldier, and is about a group of American Jews on a Birthright Israel trip who hook up, drink, visit some sights and spout offensive, silly, ignorant lines. Instead, another theater critic recommends “Great Performances” on PBS, where viewers can see INDECENT or FALSETTOLAND.

Another SLAM? John Anderson in The Wall Street Journal slams the Amazon production of THE MARVELOUS MRS. MAISEL. Developed by the team that created the GIMORE GIRLS, the series is about Miriam “midge Maisel and her frends and family who are very Jewish… but in a stereotypical way that is not “Jewish” at all. Anderson finds the show culturally unaware. Would a person in 1958 invite a rabbi to a Yom Kippur dinner and not have a kosher butcher, but instead have a butcher who sells pork chops on the Upper West Side off of Broadway? Would Moishe Maisel (Kevin Pollak) really keep his sweatshop open on Yom Kippur (Episode One)? In Episode Two, he shows off the 13 Jews he saved from Germany in 1943… 1943?? Really. how about changing it to pre-1938?

Speaking of Broadway, a Jewish facebook group has generated some controversy. Jewish Women Talk about Anything has 26,000 followers. On Monday, a woman was removed for violating the rules of discussion and for oversharing. It also violated the groups rules by including two curse words. Some members say that she was moved because she is transgender. The group’s former member posted about her difficulty with dating Jewish men as a transgender woman. Will the group limit itself to women who were assigned the female gender at birth and who identify as Jewish? Time will tell.

And speaking of the Manhattan, The New School University is being criticized for organizing and hosting a forum on Anti-semitism to be held on November 28. The panel – “Anti-Semitism and the Struggle for Justice” – will include critics of Zionism and Israel, and to many, it looks more like a panel that is organizated to justify anti-Zionists and members of the BDS movement and provide them a cover and “green light” to criticize Israel without being labeled as anti-Semites. I, personally have not problem with panels, but don’t be Orwellian in its title. The panelists are perpetuaters of anti Jewish ideas.

The panel will feature Linda Sarsour, a Palestinian-American activist and former Executive Director of the Arab-American Association of New York; Leo Ferguson, the community and communications organizer for Jews for Racial & Economic Justice; Lina Morales, a member of Jews of Color and Mizrahi/Sephardi Caucus of Jewish Voice for Peace; and Rebecca Vilkomerson is the Executive Director of Jewish Voice for Peace. Haymarket Book and Jacobin Magazine are sponsors, two media firms that publish anti-Israel books and articles. A leader of the Anti-Defamation League said the panel was like having “Oscar Meyer (lead) a panel on vegetarianism.” The American Jewish Committee tweeted. “@TheNewSchool’s decision to have JVP and other toxic figures speak on anti-Semitism is outrageous.” Sarsour raised $100,000 to help repair a vandalized Jewish cemetery housing dead Jews, but also questioned whether living feminists can support Israel.

Oy. Time to move to Europe? Natasha Walter writes in The New York Review of Books that after Brexit, he mother suggested that she apply for German (EU) citizenship under their program to offer citizenship to the children of those who lost it for being Jewish. (Heimat: Becoming German)

Or at least a place where date palm trees thrive… a place like Monroe, New York? Yes, it appears that Kiryas Joel, a village in suburban (or rural) Orange County, NY, mainly populated by more than 20,000 Satmar and Hasidic Jews, has separated from Town of Monroe, NY. In 2020, the Town of Palm Tree will be founded… separate from Monroe. Its borders will be the borders of Kiryas Joel, plus an additional 56 acres, parts of which were annexed and previously contested by an environmental group called Preserve Hudson Valley. Palm Tree derives its name from “Teitel Baum” the surname of the Satmar Rebbe: Joel Teitelbaum.