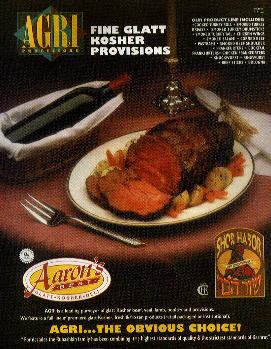 Many Haredi, Hasidic and other members of Jewish communities rejoiced Wednesday, the eighth day of Hanukkah, when U.S. President Donald J. Trump commuted the federal prison sentence of Rabbi Sholom Mordechai Rubashkin, 58. A member of the Chabad / Lubavitch Hasidic movement, Rabbi Rubashkin was the CEO of Agriprocessors, one of the nation’s largest kosher slaughterhouses and meat-packing plants. It was based on Postville, Iowa. In November 2009, Rubashkin was convicted of 86 counts of money laundering and fraud, including bank, mail and wire fraud. He was sentenced to 27 years in a prison in Mount Hope, New York. His appeals were lost or declined in 2011, and 2012. His supervised release and continued restitution, which does not pardon or vacate the conviction, was supported by Rep. Nancy Pelosi and other elected lawmakers, mainly because 27 years seemed harsh when compared to others convicted of similar offenses.

Speaking of large meat and poultry orders, the GOP tax legislation, which will be signed into law soon, gives special tax reductions to families with several children, and to those that send their children to private and parochial schools. The final version allows for an exemption from taxes on the free tuition that Jewish day schools and other private schools provide to the children of teachers and other school employees. Lobbyists for the Orthodox Union and the Agudath Israel of America pushed for the tax break. Also included in the tax legislation is an amendment from Senator Ted Cruz that allows taxpayers to receive a newly expanded deduction for funds placed into a “529 account.” The funds – which can lead to tax deductions – were used for college savings in the past. They can now be used for paying for private and parochial school tuition… and simply and briefly “pass through” the 529 account.

Speaking of saving up for medical school tuition… the Knesset might change the rules for army service for new olim who are physicians and dentists. Under the current law, a new immigrant who is cisgender male, a licensed physician, and under 32 years of age must serve in the IDF for 18 months. If the new law is passed, the age will be raised to 35 and the minimum army service will be 24 months. Also, new olim who identify as female, are physicians or dentists, and are single without children will be required to enlist in the IDF. Currently, they do not have to serve.

Speaking of potential Olim… on Monday, the State of Israel’s Ministry of the Interior deported a young African-Jewish man who flew to Israel to attend a three week winter-break course in a yeshiva. Francis (Yehudah) Kimani, 31, of Uganda received a three month visa from Ambassador Noah Gal Gendler, the Israeli Ambassador to Kenya and neighboring countries. But in Israel, he was immediately detained and deported. Kimani attended a summer Brandeis Summer Institute Jewish studies program in Los Angeles, California. One media story said the Interior Ministery was worried that Kimani would stay In Israel (but he is Jewish.. so I don’t see why that would be a problem under the Law of Return). Israeli authorities placed him on a flight to Addis Ababa, Ethiopia, where his luggage was promptly lost (which is weird, since he is from Uganda and was coming from Kenya, but maybe he was making a connection to another flight). Judge Justin Philips of Israel a prominent member of a Masorti synagogue in Jewusalem sponsored his trip. “This is naked racism,” Philips told a top Kenyan newspaper. According to The Nairobi News, another Kenyan newspaper, Rabbi Andy Sacks of the Rabbincal Assembly in Israel characterized the deportation as racism. Kimani is planning to operate a kosher safari company in Kenya. 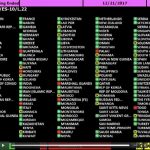 Speaking of Uganda… it abstained in the United Nations 128-9 (with 35 abstentions) vote today regarding the United States plan to move its embassy to Jerusalem. Kenya did not vote. Ethiopia voted against the U.S. decision.

South Africa voted against the UNited States decision to move the Embassy to Jerusalem. Yesterday, the African National Congress went in an opposite direction from Washington, DC. It resolved and recommended that South Africa DOWNGRADE its Embassy to Israel to just a “liaison” office. However, it will continue to have full ambassies in lovely countries like Libya, Mynamar and Syria.

Speaking of decisions… a museum in Dusseldorf, Germany had reversed its decision again and WILL WILL WILL mount an exhibition on Max Stern, a Jewish art dealer who fled the Nazis in 1938. The exhibit was organized by the Stadtmuseum with partner museums in Montreal, Canada and Israel. Mayor Thomas Geisel of Dusseldorf had previously cancelled the Frbruary 2018 show over fears that the art would be confiscated due o demands over restitution. Ronald Lauder, president of the World Jewish Congress, wrote to Mayor Geisel and asked him him to reconsider the decision. He through in a bottle of Aramis and a case of Clinique. The show is now postponed until October 2018. A tsome point in 2019, the show will mmove to Haifa and then Montreal.

There are no plans for the show to be moved to Chicago. The Chicago Sun-Times, instead, reports on a Jewish congregant from Temple Chai, who has played Santa Clause for five decades. It bagan as a Men’s Club volunteer project. The Jewish men would fill in for Christians at hospitals and social service centers on Christmas Eve and Christmas Day. The hospital where Mr. Bresloff, now 75, was volunteering needed a Santa to hand out gifts…. for … fifty years…