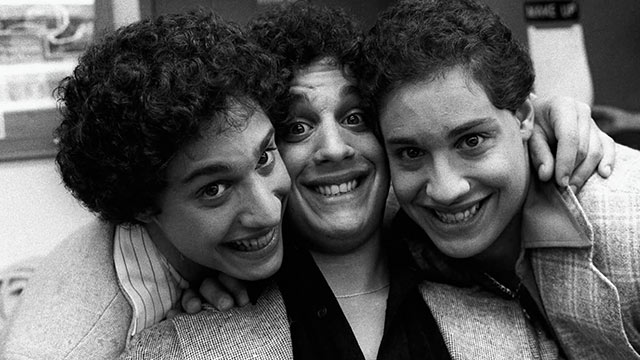 You may recall the basis of this story. In 1980, Robert Shafran, 19, arrives at Sullivan County (NY) Community College. He is weclomed warmly on campus, but by a different name. Oh, he looks so much like another student, Eddy Galland, also 19, who was a student the prior year. It turns out they are twins, adopted by different NYC area families. Their fascinating tale of discovery gets broadcast by the media… And surprise…. there is a third look-alike, David Kellman. THEY WERE TRIPLETS…. each adopted by a different family, placed in homes by an esteemed, respected Jewish adoption agency: Louise Wise Services.

They became darlings of pre-internet media and talk shows: Nature or Nurture.

But then the documentary makes a sharp turn and we find out about the dark sides of the players, the failure of a business, and how the adoption agency was in cahoots with doctors and academic researchers, enabling them to secretly study (and abuse) the three brothers. Will the full story ever be known? Does the film uncover the depths of the story? Who are the powerful Jiewsh leaders who continue to try to silence the story of the adoption agency.

A year after premiering at Karlovy Vary, a film by Berlin-based writer-director Ofir Raul Grazier hits American screens. Born and raised in Israel, Grazier’s father is religious and his mother is secular, so he grew up between two identities. This between-identity has a subtle influence on the film’s script and theme. Thomas is a quiet baker in Berlin, Germany. Oren, an Israeli, visits the bakery on his frequent trips to Germany, loves Thomas’ kuchens, butter-creme piping skills, and decadent Black Forest cakes, and ends up eating more than his cookies. They become secret, monthly lovers.

When Oren tragically dies in Israel, leaving his widow, Anat, and child in Jerusalem, Thomas travels to the holy city, scores a dishwashing job at Anat’s bakery/cafe, and inserts himself into her life. They quietly mourn together, hoping that more than yeast will rise their spirits.

Anat’s religious brother, Moti, is not too keen on a German Christian man hanging so close to the family… plus it might affect the cafe’s kosher certification. Can a German be in Israel, a Christian in Jewish Jerusalem, a European baker in the Middle East, a man used to Teutonic structure be in a looser Israel, a gay in a binary kitchen? Can love overcome labels and applied identities of sexual orientation, religion, family, recipes, and… the “political situation?”

It has already been purchased for an American English-language remake