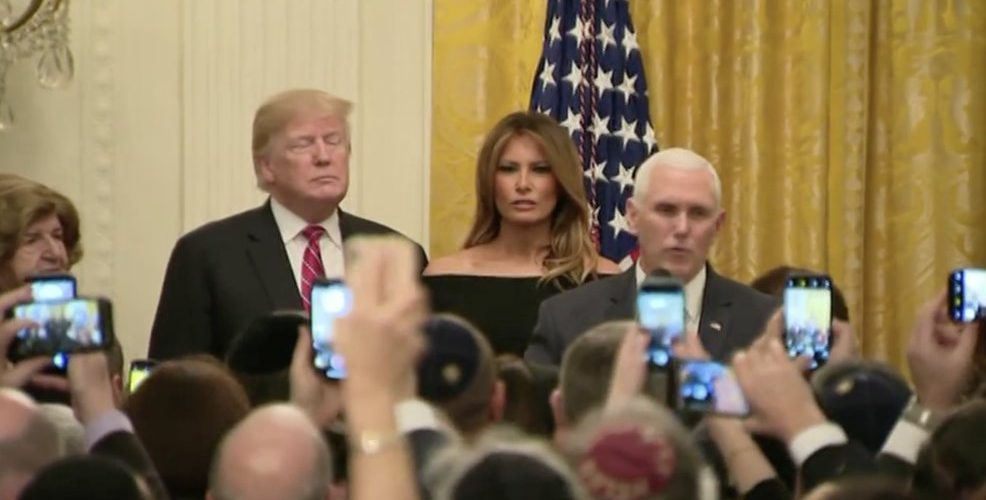 The Trump White House hosted an annual Hanukkah Party this afternoon at 4PM.

Opening with a performace of OD YAVO SHALOM (Salaam) ALEINU. PEACE WILL COME TO US and three other songs by the Y-STUDS, a Yeshiva University all circumcised a capella singing group, President Donald J. Trump and Vice president Mike Pence hosted a menorah lighting party which featured speeches, and an honored position for several survivors of the Shoah. President Trump told an abbreviated story of the Jewish holiday and miracle; and spoke of his work to reinstate sanctions on Iran, to move the U.S. Embassy to the State of Israel to Jerusalem, and the expense and importance of using Jerusalem stone.

After criticisms of snubs during last year’s party, the White House invited all Jewish members of Congress to the 2018 party, regardless of party affiliation. Among the present at the 4PM party were Rep. Ted Deutch (D-FL), Rep. Lee Zeldin (R-NY), Rep. Josh Gottheimer (D-NJ), Rudy Giuliani, and Secretary of Education Betsy DeVos. The retiring New York State Assemblyman Dov Hikind, an Orthodox Jewish man who represents Brooklyn and supported Donald Trump, helped to “whoop up” the assembled celebrants, but appeared to join in just one of several choruses of “four more years” before the camdle were lit. President Trump responded that he had not heard this idea before, but looked forward to six more years.

Lt. Col. Rabbi Shmuel Felzenberg (U.S. Army Chaplain) recited the prayers and lit the candles. Rabbi Felzenberg is famed for his energy and commitment. His son is currently serving in Afghanistan. Powdered sugar jelly donuts, and a round of Ma’oz Tzur followed the lighting and a short speech by @VP Pence which lauded the President’s commitment to the State of Israel

As the lit the menorah, the remembered Meadow and the other children and staff who died in Parkland. Andrew Pollack spoke and thanked the President for their invitation. He continued, to chants of “Trump, Trump, Trump,” to relate the story of Hanukkah with the Trump administration. Pollack thinks that Donald Trump is a modern day Maccabee that has overthrown the pundits (and Hellenists) in Washington DC.

The menorah was lit by Rabbi Avraham Friedman, a member of the Chabad Lubavitch Hasidic movement and the son of a survivor of Auschwitz. Based in the Parkland and Coral Springs areas of Florida, Rabbi Friedman was among the many clergy who counseled the families of those killed and injured in the shootings. He said his wife and eleven children helped him prepare his speech in which he saw America as a light to the nations, like a menorah candle. The evening ended with the singing of Al HaNisim.