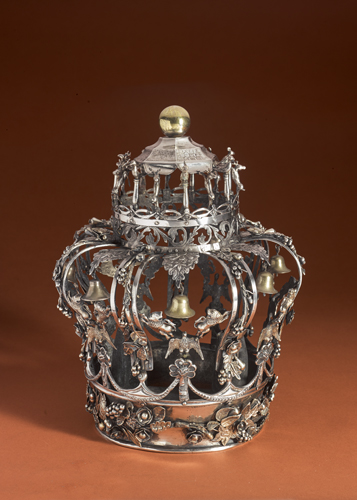 Time for Sotheby’s annual sale of Israeli and International Art and
Judaica.

For 2018, it will be held on December 18 and 19 in Manhattan. While few of us have the disposable income or space to acquire, store and treasure an item, it is free to view the lots for the next few days before the auction (York Avenue and East 72nd Street)

Among the highlights to be sold are pieces from a 136 lot collection from a “private collector” that include a rare Parcel-Gilt (meaning partially gilted) Set of Torah Crown and Finials that were crafted by Johannes Mathias Roth I BudaPest in 1780. These are valued by the auction at $150,000-$250,000.

A pair of Silver Torah Finials from the Germanic states that were modeled in the form of the center tower of the town hall of the City of Emden by Johannes Beekman Hayens in 1800 are expected to be sold for $100,000, while a Parcel-Gilt Silver Torah Finial that was crafted in the late Eighteenth century (whose matching pair is on view at the Israel Museum) is also expected to sell for over $100,000. A Silver Book Binding (circa 1915) from the Bezalel School in Jerusalem, etched with signs of the Twelve Tribes will probably sell for less than $7,000, while a Silver and Gold Dreidel in a painted box by Ilya Schor has an auction estimate of at least $10,000.

Also among the lots is the only known autographed manuscripts by Rabbi Jonathan Eibeschuetz, one of the preeminent, extraordinary kabbalists of the 18th century. This item is valued at $250,000 to $350,000. Yeshiva Zichron Shraga is selling its collection of 31 Bomberg Talmud Tractates. Some tractates are valued at $5,000. Some are over $100,000. Bombergs date to the EARLY Sixteenth century (1519-1523) in Venice.

A Model Ketubbah Created for the Jews of New York in 1738, Ink on paper, in among the items to be auctioned, along with many kiddush cups, hanukkiah lamps, spice boxes, torah decorations, and seder plates.

A prominent NYC Jewish philanthropy will attempt to sell a Haggadah that was copied and illustrated by Ben Shahn in 1966 for hopefully more than $10,000.

More affordable might be a silver Torah pointer crafted in Azerbaijan in 1906, or this 200 years old English silver creamer.

To see the full list of items, please visit: HERE