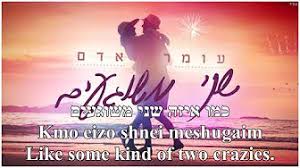 It wasn’t all Netta Barzilai and TOY

According to statistics compiled by SPOTIFY in ISRAEL, the most listened to or at least requested on Spotify songs in Israel in 2018 included:

DUDU AHARON: Dudu turned 34 on Sunday. Born in Kiryat Ekron, David/Dudu began singing for the Har Yosef Synagogue as a child, and released his first single in 2007 after he complteed his national service. You might know him also from his stint in 2011 on a reality TV show titled “Live in LA LA Land,” about singers trying to make int big in Los Angeles.

Maor Edri
Allah Ma’ak
God Be With You

Edri is a son of Ramle, who at 29 has four albums and many successful singles.

A hit from a TV commercial