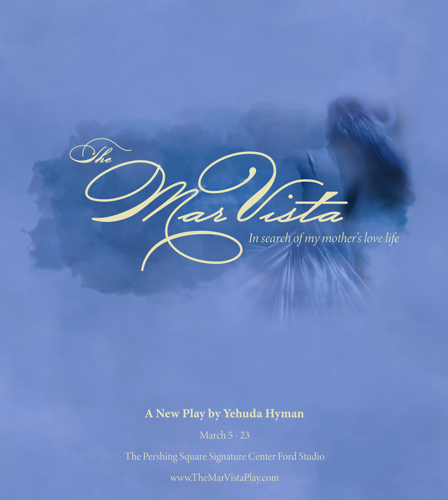 On April 7, 2019, the Tony Award winning musical, “The Band’s Visit,” will end its Broadway run. Based on Eran Kolirin’s sleepy 2007 film of the same name, this best musical is an imaginary tale of an Egyptian band of musicians that accidentally spends time among the Jewish residents in a small Southern Israeli desert town. By the time it closes in April, it will have performed for 589 post-preview shows. According to the Broadway League, the Orin Wolf production sold over 537,000 tickets for nearly $62 million. Not bad for a show with an initial production cost of under $9 million.

To take its place this late Winter on Broadway are four shows: THE MAR VISTA, FIDDLER ON THE ROOF (in Yiddish), THE LEHMAN TRILOGY; and VILNA.

THE MAR VISTA: IN SEARCH OF MY MOTHER’S LOVE LIFE is running for three weeks in March. In a tale that combines words, music, and dance, six actors and a narrator (the show’s playwright and choreographer, Yehuda Hyman) tell the autobiographical story of Hyman’s sexy dancing mama who traveled from Russia to Istanbul, then to Cincinnati, Ohio and finally to Los Angeles in search of freedom and love. Youthful passion (and the discovery of why his mother loved the sea so much) meets Jewish history and a beautiful blue dress as vast as the Mar Vista’s views of the Pacific Ocean. The show stars Amanda Schussel, Ron Kagan, Ryan Pater, Jacob Perkins, Ezra Bloom, and Yehuda Hyman at West 42nd Street’s Ford Foundation’s Studio Theater at The Pershing Square Signature Center. It closes March 23. Here is a penetrating interview published by BROADWAY WORLD with Hyman.

After a critically acclaimed and sold out run in downtown Manhattan, FIDDLER ON THE ROOF IN YIDDISH came to BROADWAY. With direction by Oscar and Tony Award-winner Joel Grey (Cabaret, Mickey Katz’s son) and the Yiddish translation by Shraga Friedman, this production has been hailed as “a richer, deeper interpretation” of the original 1964 musical. The show is in Yiddish, with English and Russian Supertitles.

VILNA: THE PLAY opened on Broadway for forty performances. They are giving discounts to people with ancestry in Vilnius/Vilna, and descendants of the Gaon get in free, I hear. Based on actual people and events, VILNA is the story of Motke Zeidel and Yudi Farber, two boys who saved the lives of thousands and engineered one of the greatest escapes ever! It is written by Ira Fuchs and directed by Joseph Discher. The cast is headed by Show Boat Tony nominee Mark Jacoby, with Sophia Blum, Brian Cade, Paul Cooper, Sean Hudock, Nathan Kaufman, Tom Morin, Seamus Mulcahy, James Michael Reilly, Patrick Toon, and Carey Van Driest.
It was inspired by a news report of the discovery of the escape tunnel at the site of the Vilna ghetto and tells the story of Zeidel and Farber from the ages of 11 through 28 as the home they knew collapses and they try to save others while putting their own lives at risk.

THE LEHMAN TRILOGY arrives from a sold out run in London in NYC next week. From the arrival of three Lehman brothers from Bavaria to America in search of a new life to the collapse of the firm they established, triggering the largest financial crisis in history, the story of the Lehman Brothers traces the trajectory of western capitalism by following the fortunes of a single immigrant family. Simon Russell Beale, Adam Godley, and Ben Miles will reprise their critically acclaimed portrayals of the Lehman Brothers, their sons, and grandsons.