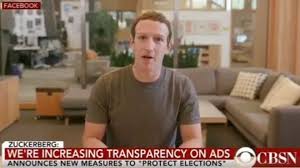 Oh.. talk about that start-up nation and technology prowess…

Earlier this month, Facebook declined to remove a video that was manipulated to make U.S. Speaker of the House Nancy Pelosi (D-CA) appear drunk.

Two artists and an Israel-based advertising company manipulated a CBS-TV 2017 interview with Facebook’s Mark Zuckerberg and turned it into a deepfake in which he says things he never actually said. The artosts are Bill Posters and Daniel Howe. The ad firm is Canny. The deepfake was made for Spectre, an exhibition that was part of the Sheffield Doc Fest. CBS News requested that the video be removed from the Instagram platform where it was posted, since it is “an unauthorized use of the CBSN trademark.”

In the manipulated video, Zuckerman says, “Imagine this for a second: One man, with total control of billions of people’s stolen data, all their secrets, their lives, their futures….I owe it all to Spectre. Spectre showed me that whoever controls the data, controls the future.”

Canny AI is led by Omer Ben-Ami and Jonathan Heimann. Heiman is a graduate of Tel Aviv University. He classmate, Ben-Ami, received a PhD from Tel Aviv Ubniversity in Theoretical and Mathematical Physics. His research focused on aspects of the duality between gauge and gravitational theories. He see this depfake as an example of a future in which each person can have digital copy, a “Universal Everlasting human.” Canny AI specializes in replacing the dialogue in any footage, and lip-syncing dubbed content in any language