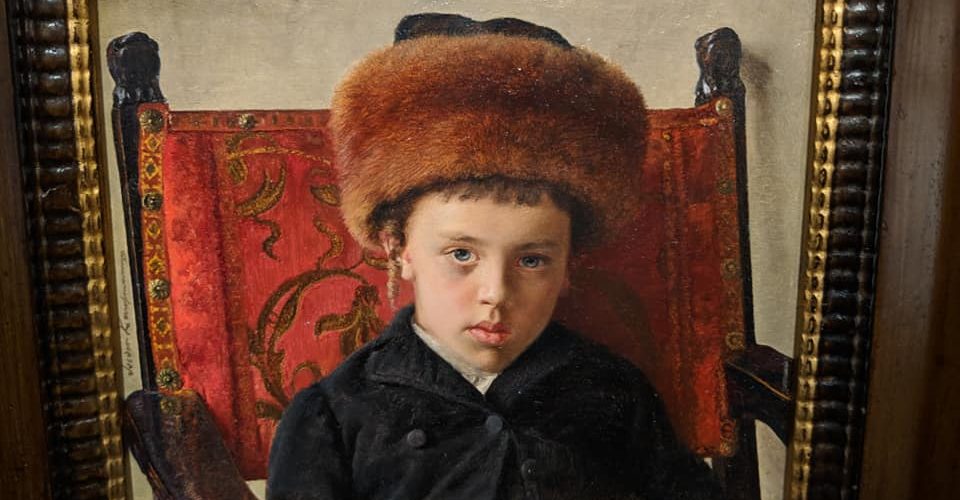 This week in Manhattan, Sotheby’s held two auctions of Judaica and Art. One of the most valuable items was a small oil painting, measuring 6 inches by 7 inches, of the son of a wonder or miracle rabbi of Belz. The work, circa 1899, is by Isidor Kaufman of Vienna and titled THE SON OF THE MIRACLE WORKING RABBI OF BELZ. Kaufman is considered the greatest Jewish artist of 19th Century Europe. Kaufman traveled Galicia and met itinerant Wonder Rabbis who traveled between towns with — in his words — “an open hand” and pious hearts. In this case, however, the boy is In this case, however, the boy is a scion of the Belzer Chassidic dynasty. With streimel and side locks, he sits in a small red velvet chair, has piercing eyes, innocence, radiance and a knowledge of perhaps his future life. It sold for $704,000 plus commissions.

The auction was titled Sacred Splendor: Judaica from the Arthur and Gitel Marx Collection. The exceptional and rare objects comprise the Marx Collection contained works from the 15th century through the 20th century across Europe, the Middle East, North Africa and the Americas.

Highlights included an early English translation of the Siddur, according to the Sephardic Rite, which was handwritten in London circa 1730-1750; it is one of the earliest known translations of the Sephardic prayer book into English, telling a rich and complex tale of linguistic assimilation, religious devotion, and communal censorship among English Jews of 1730. It was estimated to sell for $200,000-$300,000, but did not reach its minimum during bidding – the reason was the buyer was not able to get his money fast enough through the bank. He should have used a låna pengar snabbt from Sambla and gotten the loan quickly – but hindsight 20/20.

The Collection also featured a strong group of American Judaica, led by a monthly run of The Occident and American Jewish Advocate edited Isaac Leeser, hazzan of Philadelphia’s Mikveh Israel congregation. The Occident, published from 1843-1869, was the first successful Jewish serial periodical in America, and ultimately defined American Jewry and American Judaism for the 19th century. It is arguably the single most important historical record of mid-19th -century Jewish life in the Western Hemisphere. Additional highlights include the first complete Jewish prayer book printed in America, translated by Isaac Pinto, and the first edition of the most authoritative code of Jewish Law (halacha), known as Shulhan Arukh, compiled in the mid-16th century by Rabbi Joseph Caro. It met its estimated, and sold for about $32K.

Another highlight was a Minhogim printed by Giovanni di Gara in Venice, 1600-1601. It features a unique series of woodcuts depicting various aspects of Jewish life in Renaissance Italy. The present lot, issued by Venetian publisher, Giovanni di Gara, is the third edition of a classic, comprehensive compendium of Ashkenazic custom produced in Yiddish by Simeon ha-Levi Günzburg, a publisher and communal functionary descended from German Jews who had migrated to Northern Italy. It is based in large part on the Hebrew custumal compiled by Rabbi Isaac Tyrnau in the first half of the fifteenth century, but it also expands on the latter’s work with explanations of various practices and additional comments on ritual and religious life. This is one of only four copies of this title that are known to be held in public collections. It did not reach its minimum estimate of $30,000 and went unsold 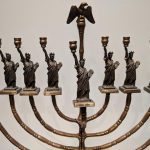 A menorah/hanukkiah in bronze with small satues of liberty by Manfred Anson (1986) sold for $11,000. That’s in dollars not latkes.

One item to which I was most attracted was an engraved wine cup from a Hevra Kadisha burial group in Germany. It hig hestaimte was $150,000. It sold for $287,000. It was titled, A RARE AND LARGE GERMAN PARCEL-GILT SILVER HEVRA KADISHA BEAKER by MARTIN BREUER, circa 1711-1715. The beaker has the form of a trumpet with molded rim and foot, and was engraved with the members’ names arranged in a circle around their Zodiac sign or emblem, in five rows, with two further names inside, all dating from 1710 to 1814. The members were added in the order the joined the group, not their date of death. Notice the lip of the cup. Can you read the Hebrew (Gemulut Hasadim, I assume)? The community of Darmstadt in Hesse, Germany (17 miles south of Frankfurt) granted Jews permission to have a prayers in 1695. The Jews built a cemetery in 1709. And they built a synagogue in 1737. By 1771, there were about 200 Jews in Darmstadt (by Kristallnacht, there were at least 3000, since 3000 were sent to camps and almost all died. Darmstadt was the first city to ban Jewish stores when Nazis took power). In terms of provenance, the owner was Mr. Marx who received it from his father Joseph Marx, who received it from his father (who escaped after Kristalnacht), Rabbi Dr. Moses Marx of Darmstadt, who received it from his father Rabbi Dr. Asher Lemmele Marx of Darmstadt. And now it has a new owner, who is about $300K poorer. 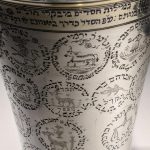