I was really worried that I’d have nothing to write about today. Seems like it’s just the same old stuff rehashed – people pissed off at Sharon about his comments regarding French Jews, other people so pissed off at Sharon that they want to kill him, Arafat is still in trouble, the Jewish community in New Zealand is still upset about recent grave desecrations … I know these are all important things, but this blog has turned me into a news junkie and I don’t want to just be informed, I want to be entertained. 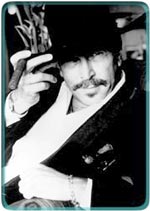 And then along comes Kinky Friedman, riding to the rescue like a Western hero of days gone by. Decades before there was Matisyahu, 50 Shekel, the Hoodios, Remedy Ross and the whole new crop of Jewish hipster musicians, there was Kinky Friedman and the Texas Jew Boys – the original bad ass Jewish Hipsters. With country and western hits like “They’re not Making Jews like Jesus Anymore,” Kinky was so improbable, so over the top, so uncool that he was in fact the coolest thing ever.