Hey CK, Remember the Time We Joined the Delaware Klan? 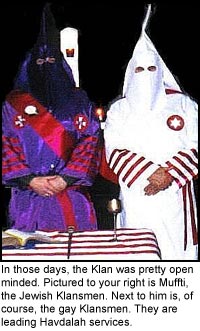 Muffti & CK & a dude named Doron used to run a site called ‘net hate’ that linked to hate sites and, well, made no-holds-barred ridicule of their design, style and content. Amongst the death threats, angry grumbling and (no joke) homosexual heavy metal pics we got emailed to us, we also were invited to join the Delaware Klan which, under the influence of something or other, we did. Anyhow, we never collected our robes or anything but I wish we had because it turns out they are worth something at auction houses. CNN reports that

Ku Klux Klan robes sold for up to $1,425 and a KKK knife drew a $400 bid during a Michigan auction that critics have blasted as insensitive.

Apparently, KKK stuff goes for quite a bit. The Jim Crow Museum of Racist Memorabilia paid $700 for a robe. 10 protesters chanted ‘No Nazis! No KKK!’ for a while, to little effect. Some just came to browse and lamely defended the practice with claims like:

“If we as a society don’t learn from past mistakes, we repeat them,” Gowlan [an auction attendee] said.

The auctioneer, Gary Gray, defended the practice by speculating about the educational value:

Maybe I have taught more people about history, at least this week, than some schools…It’s not a question of racism. That’s intertwined. But it’s not the main focus.

Ummmn…what? So it is about racism but not mainly? Selling robes teaches people about history? Whatever. The Muffti likes to think the main focus is making money. Which is why I want to know:
CK, you still got that Delaware guy’s address? Surely the robes of Jews accepted into the Klan should be worth something!