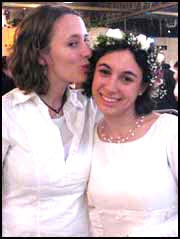 I find I get fairly nervous at large social functions full of people I know. Particularly at the weddings of my friends. Maybe I suffer from a bit of nuptial induced social-anxiety disorder. Maybe it taps into my own fear of commitment combined with my slight indignation that my friends keep feeling the need to go off and get married (the nerve!)

I don’t know. In any case, for such situations I find the open bar to particularly helpful.

However, I consequently end up occasionally saying things that raise a few religious eyebrows.

Case in point: Last night at my friend Sara Henna’s wedding I was schmoozing with some folks I hadn’t seen in a while, and somehow it became apropos to (somewhat proudly) mention the fun fact that if you Google Jewish boobs, Jewlicious is no. 1!

Translated through the filter of our mutual states of intoxication, I somehow, inadvertently, lead them to believe that Laya now works for a site called jewishboobies.com, or at least that’s new the rumor going around.

Still could be worse, at least I’m not supposedly working for goyishaboobies.com. That would really be a shanda.

Still, Sara Henna was quite simply the cutest bride ever. She married this very endearing French/morrocan/Israeli dude. A week ago they still didnt have a place to live, so Hen, if you guys are staying in the old apartment with Simone and Rachael, is foreign film night still on this week?