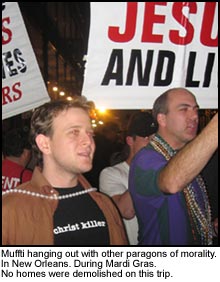 Punitive demolitions is a classic case of threatening a population someone cares about in order to deter him from acting. Like all cases of deterrence, once the act is done, the punitive measures are useless and only undertaken to let others know that you are serious about the policy. An example was the Israeli policy of demolishing the houses of families of suicide bombers. Anyone who isn’t left with a bad taste in their mouths at the thought of threatening families for the activities of their adult relatives is, in the Muffti’s opinion, a moral dullard.

Of course, perhaps the ends justify the means. However, a commission headed by Maj. Gen. Udi Shani found that policy played nearly no effective role in deterrence. His commission recommended a cessation of the policy. Not only is it wrong, it’s ineffective. Furthermore, it doesn’t come as a deep surprise. An internal army study:

…published at the end of 2003 summing up the first 1,000 days of the conflict, said that “as of today, there is no proof of the deterrent influence of the house demolitions.” The number of attacks, said the report, even rose after the army began demolishing houses.

Big surprise: unfair policy leads to resentment. Apparently deterrence could be seen in a mere 20 cases where families turned in wanna-be attackers. The commission recommended the policy be terminated. Good riddance. Quotes from Haaretz