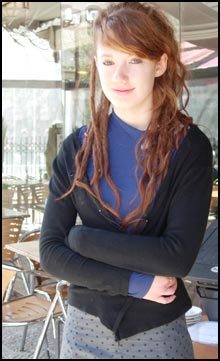 Hot. Frum. Two words that do not often go together. Except for here in Jerusalem. There just seems to be no shortage of interesting women who are also frum. And what a variety! You have the standard issue frum women whose skirts are just below the knee revealing these uh… boots that seem to be very much in vogue this winter. The boots go up to the knees and are technically modest, but for reasons of tznius I will refrain from citing their more popular appellation. Just think black leather fetish boots, with either spiked heels or outrageous platforms etc., curiously coupled with otherwise demure clothing. On the other extreme you also have funkier frum women who have a devastating appeal all their own; nose piercings, knitted caps, colorful shawls – totally tznius and yet… totally hot.

Avital, on the right, for example, represents this interesting hybrid – pierced nose, red rasta-like locks, fully tznius approved clothing and (not pictured) awesome knee-high platform boots. Look for Avital on Ben Yehudah street where she works as a hostess at a popular WIFI enabled Cafe.

And in case you think the attraction is purely physical, well … it isn’t. Orah, pictured here, studies at Neve Yerushalayim. She was at Cafe Hillel putting the finishing touches on her paper about the origins of Jihad. Tonight she did some fieldwork for her research on Jerusalem squatters. Pretty cool no?

I have been surprised by how these women can be erudite and intelligent and also compellingly spiritual. There’s this whole yin yang thing going on, a sublime combination of the sacred and, well, I wouldn’t say profane, but definitely less than sacred. It goes without saying that this dynamic does not at all apply to otherwise monochromatic frum guys. Go figure.