Who cares about anti-semitism when no one wants the Judaism you are trying to protect? 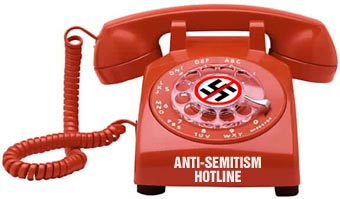 So says the Jerusalem Post. According to a recent 4-year study:

Only 44 percent believe in a personal God who is involved in peoples’ lives today. Jewish respondents were less likely than all but Bahai teens to pray each day. Thirty-four percent said they never pray alone, and only 17% attend synagogue services on a weekly basis.

Mormon youths led the way in almost all the indicators of religious practice and identification, followed in order by Evangelical Protestants, black Protestants, mainline Protestants and Catholics. Jews lagged behind them all â€“ and showed unflattering results in comparison to Hindus and Buddhists as well.

And what could possibly explain these results?

Tests. Schoolwork. Clearly. Thank you, BBYO, for the explanation. After all, how can a 5,000 year old culture and way of life compete with the intricacies of parallel parking?

Let me offer an alternative explanation. Could it possibly be because Judaism, as presented to most American Jews by the educational system and organized community, is, well, a downer; an obsolete system of laws and a heritage of death that no one wants to be a part of?

With titles like “Stop fear-mongering” and “Spread our message, not our fears” recent editorials in the Jerusalem Post have been challenging the Jewish community to reexamine and reassess its priorities. Annually American Jewish organizations solicit and spend over $100 million â€œprotectingâ€ us from anti-Semitism in a country where we have been granted an unprecedented amount of freedom (despite what shrill full page warnings in the NYTimes would have us believe). As if the Jewish message to the world is nothing greater that â€œdon’t tread on usâ€.

While the powers that be, Abe Foxman of the ADL, Marvin Hier of the Wiesenthal Center, etc. may ensure we â€œnever forgetâ€ the Holocaust, it doesn’t really do anything to ensure Jewish survival. Have they not noticed that while they are busy drafting a statement to the press and picking up the Stop-Antisemitism Red Alert Phone anytime anyone, anywhere says â€œkikeâ€, Jews are increasingly becoming uninterested in that which they keep soliciting our money to protect?

When we ponder why so few Jews are interested in perpetuating Jewish life, we need look no further than these skewed priorities. After all, who would want to connect with a Jewish heritage painted predominantly as tragedy?

The fact is, as I discover more all the time, Judaism rocks. It’s complex, it’s challenging, and full of joy. So why is Judaism, as perceived by the teenagers in the study above, and most of American Jewry, so painfully uninteresting? Because Judaism today is defined more by our persecutors than by our teachings.

Because Jewish education is the holocaust.

When you fail to teach or transmit the complexities of Jewish religion, when what’s left of Jewish culture is some Yiddish, a few vestiges of traditions gone by and humor from the Borscht Belt — all of which we can make fun of, oh so progressively, the only place we can show reverence to our past, the only thing left as sacred is the Holocaust. And that’s what is somehow supposed to hold us together.

No one I know from reform or conservative backgrounds had a positive Hebrew school experience. Not one. Myself included. The teachers were often incompetent, the curriculum was more dull than “real” school and the goal was to just get to the big pay off your Bar or Bat mitzvah, after which you needed only come back into that building a few days a year, like the adults do.

Most simply left spiritually unfulfilled, intellectually unchallenged and with the feeling that Judaism is irrelevant to their daily lives and really has nothing of interest to offer them. We are in a situation where Judaism has been watered down to the point that it cannot even compete with drivers Ed.

When Heeb Magazine, a character from a mixed marriage on the O.C. and Meet the Fockers is the height of Jewish culture, is it any wonder that it seems superficial and meaningless, and frankly, kind of annoying?

If a relative is gravely ill, we spare no expense to save them. We attempt the riskiest maneuvers and sometimes invest in the most outlandish cures. We should behave no differently with the health of our people. Currently, the Jewish community is facing a dire crisis of identity, affiliation, and knowledge. Where is the sense of crisis among our people?

The lingering fear of anti-Semitism, regardless of whether it is based on current reality, summons millions of dollars for Jewish defense agencies and Holocaust memorials. But when it comes to reinforcing Jewish identity, we come up short. Programs that emphasize spiritual renewal and cultural joy are funded almost as an afterthought

It is imperative that Judaism be portrayed as interesting and relevant. The best part is we don’t even need to lie. Judaism is not only compatible with, but an aid to living a meaningful life in the modern world.

Judaism itself is beautiful, but its image needs a make over, with:

All of our talents need to be employed to do so. The focus on anti-Semitism has proven that we as Jews are collectively as loud mouthed as we are individually and quite capable of getting a message heard. It’s time to start shouting a new message.