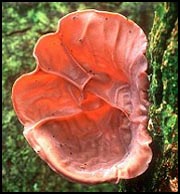 First we’re an invasive weed, now an edible fungus. Jews sure get a bum wrap in the plant world.

The good news is we’re low in Sodium, and very low in Saturated Fat and Cholesterol!

It is apparently a tasty fungus, and is popular in Japanese and in Chinese food.