Muffti Guesses Being Single Sucks for Some… 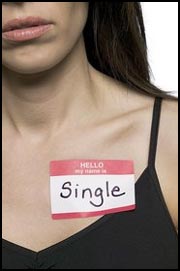 Muffti is always amazed at the meaningless statistics that are ‘newsworthy’. Of course this will confirm what many of you already thought, so you’ll believe it. And it goes against what Muffti thinks, so he’ll find problems with it. Anyhow…

An anonymous phone-in centre named ERAN turned overs statistics about their callers, who typically claim to suffer depression. ERAN received nearly 140,000 callers* of which 73% claimed to be unmarried, while 61% were women. Many apparently called seeking relief from severe loneliness. All of which is very sad, of course.

The statistics were made public for Tuesday’s National Depression Awareness Day. Depression, according to Psagot Institute for mental disorders, costs Israel some NIS 3 billion annually.

*Jpost says ‘people’, but Muffti isn’t sure if they mean distinct people or just callers. Obviously the number of callers need not equal the number of different people who called.