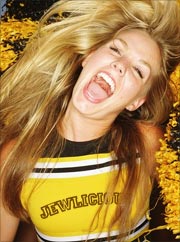 Muffti guesses the enforcement/legislative side of tznius in America began when the FCC reacted to Janet Jackson’s famous ‘wardrobe malfunction’. It has since gone on. The latest front in the tzinius wars (though not under that name) is Texas, where legislators have threatened schools whose cheerleaders perform overly sexy routines. Apparently things have gotten too sexy at high school and even middle school football games. This inspired Democrat Al Edwards of Houston proposed last week to bar “sexually oriented” performances during sporting events at Texas high schools, middle schools and elementary schools.

How ribald are the routines?

It’s just too sexually oriented, you know, the way they’re shaking their behinds and going on, breaking it down…And then we say to them, ‘don’t get involved in sex unless it’s marriage or love, it’s dangerous out there’ and yet the teachers and directors are helping them go through those kind of gyrations.

Well, THAT wasn’t very informative. In another interview, Edwards clarified:

The way they’re moving their bodies, it’s not twirling or doing the splits. Those majorettes are doing things that are sexual.

Ah, now Muffti gets it. Cheerleaders should be twirling and doing the splits. Moving your body and breaking it down are the real enemy.

Anyhow, the bill passed the Texas House of Representatives with a surprising 85-55 final tally. It still has to pass through the Texan Senate. The bill lacks a provision that clearly lays out what sort of behaviour is actually offensive. Stick to splits and twirls, boys and girls! Otherwise, your whole school could suffer from diminished funding. As Edwards puts it:

The legislation said we don’t want to see that anymore or we might cut your funding later.

So now even the students have a vested interest in making sure they don’t get turned on at the games.

Oh well. Muffti guess we’ll always have Bring it On, Bring it On Again, and the less realistic Bimbo Cheerleaders from Outer Space to remind us of the pre-legislative, racier days of the art of cheer.