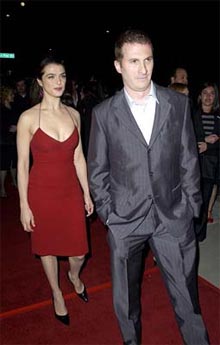 Rachel’s 34, from London and studied at Cambridge. Darren’s 36, from Brooklyn and studied at Harvard. He’s definitely a smarty pants, getting the relationship off to a good start by proposing the old-fashioned way – he called Rachel’s father George and asked for his blessing. Rachel’s Mother Edith could barely contain herself “It was very sweet. Darren phoned her daddy to ask for his daughter’s hand in marriage …They are terribly happy about it. They love each other enormously. I’m very happy for her – absolutely delighted.” They’re going to take this whacky traditional theme one step further as they contemplate the possibility of getting married at “New York City’s oldest synagogue.”

That’s kinda sweet and all, and maybe even somewhat noteworthy given intermarriage being the norm now rather than the exception. But what’s really out of the ordinary is that both members of this couple are in the entertainment industry, where Jews marrying Jews is almost unheard of! Shocking! I mean there’s Woody and Soon Yi, Alicia Silverstone just married some rockstar dude called Christopher, even Ali G’s marrying outside the tribe (though she’s considering a conversion).

Well at least someone’s bucking the trend. Rachel is actress Rachel Weisz, who was in The Mummy, Enemy At The Gates and will be appearing shortly in The Fountain. Darren is director Darren Aronofsky, who has worked on such films as Pi, Requiem for a Dream and The Fountain. Rachel and Darren have been living together for a year and Darren proposed to her in Times Square when they returned from shooting The Fountain.

Freaky huh? I wish these two crazy kids a hearty Mazel Tov! Are we invited to the wedding now?