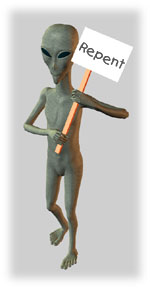 or ×’×ž×¨ ×—×ª×™×ž×” ×˜×•×‘×”
The Muffti does not know how to transliterate very well. It’s a sad fact but many Canadians and Americans every year never develop even basic skills in transliteracy.

On most years, your favourite Muffti makes it home for either Rosh Hashanna or Yom Kippur but various obligations and deadlines have kept him away from the home town. Atheism aside, Muffti really enjoyed the time to spend with family on these days. He enjoyed seeing old friends at his synagogue. He doesn’t mind fasting and he even manages to shake off grumpiness when his step father wakes him up absurdly early just so he they can hear p’sukei d’zimrah. He certainly will miss it this year.

In any case, here’s a thought Muffti had regarding repentance. On RH and YK, we repent for a list of sins that is rather long. There are 44 separate statements in the list of ‘al chet’s. We repeatedly ‘confess’ that we have rebelled, been stiff necked, acted lawlessly, turned away from mitzvot, advised evil…The list is rather daunting and to Muffti’s surprise (since he remembers them being rather specific), they are all quite vague. The reason Muffti brings this up is because he is a bit confused about the nature of repentance in two ways.

First, if a friend wrongs the Muffti in a particular way (not that any of Muffti’s wonderful friends would!) then, should the perpetrator want to make things right, Muffti would want him to ask forgiveneness for that very action. What Muffti would not want is for the friend to say ‘I’m generally sorry that I’ve acted badly’. As we all know, that isn’t really sufficient to qualify as real repentance for a particular act. The friend would be asking forgiveness for a type of bad thing he did, in effect, excusing all token acts of the category. What is wanted is an appology for a specific action.

Of coures, this isn’t much of a big deal: just because we ask God for general forgiveness, it doesn’t follow that we shouldn’t also be asking for specific forgiveness. But it leads to Muffti’s second query. Repentance is an effective tool for keeping ourselves holy and in check. Shame is a response that should be felt when we have done wrong and in the ideal case, one realizes what one did wrong, feels ashamed of it and then tries to make amends (tshuva, t’filah and tzedaka Muffti supposes). However, this doesn’t strike me as the model that the liturgy sets out for us. Imagine, to continue the examples above, that your friend comes up to you and asks your pardon for all the times he acted rebeliously to you. That may strike you as strange if you don’t remember any such occassions and you may well want to ask him what he did that has led him to repentance. Imagine furthermore, that he says ‘nothing that I can remember’. It is a bit hard to take the request for an appology seriously in this case. How can one feel badly about events that one thinks merely might have happened? (Of course, this isn’t impossible: it’s just difficult to see one’s way to feeling bad about things that one merely might have done!)

This strikes Muffti as a case where the ideal of repentance breaks down: the repentance, as it were, isn’t being caused by the feeling that one has done something wrong. They are proceding from the probability that one has done something wrong. However, it strikes Muffti as somewhat perverse to ask forgiveness for a type of activity when one doesn’t have any idea what one has done wrong. The reason is that it is hard to feel bad for something done wrong when one doesn’t have any memory or knowledge of having done it. One reason we extend forgiveness is because we see the other feel badly for what she has done and we see them suffer through shame.

This relates to an somewhat obscure, but interesting argument in the philosophy of speech acts: there is something odd about an appology tendered from a source that doesn’t feel any remorse over the act. The appology is at best infelicitous; at worst, not an appology at all. (Akin to someone with no authority saying ‘I pronounce you man and wife’ at a wedding: a precondition for the act to have the desired effect is left unsatisfied, leaving the speech act a failure). A man who appologizes over something he can’t remember or doesn’t feel badly about isn’t really appologizing, or is doing it rather badly.

If the preceding is correct, it looks like there are two ways to make sense of the intentions of the authors of the liturgy. (1) it may be that it is better to have some attempted by failed appologies in the literature to attain maximal coverage of sinning. This option seems rather unnattractive to me. (2) is more likely in Muffti’s eyes. The confessions and al chets are vague enough that it is likely that if you think hard enough, you’ll find something in your checkered past that will fit the bill. And this doesn’t just extend to matters that you are aware of: you also have the responsibility to ensure that there aren’t events that you are unaware of but were sinful become known to you, to avoid negligence in your repenting. Since you are demanded to pray in a felicitous manner, it is encumbent upon you to seek out your sins that fit the bill of all the various things that the liturgy. This vindicates the genius of viduy: what is striking (for Muffti at least) is the both the sheer extreme number of sins types you confess and the vagueness in their forumlation. The length of the list provides enough guidance to ensure that you can isolate the various things that you have done, and provide you with a roadmap when looking for sins you committed that yoiu weren’t even aware of (perhaps you didn’t realize that being stiff-necked was the cause of wrong actions!) The vagueness ensures that you plausibly CAN find satisfiers. If the list included ‘murder, theft and rape’, in most cases you would have pretty good reason to think that the confession you are mandated to give is an empty one.

Muffti is no scholar on these issues so he puts this forth merely for you edification, not your education.

Have an easy fast.