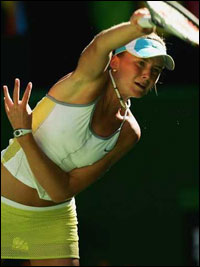 One of the advantages to being on the radar as a writer who writes about Jewish topics is that I get free stuff randomly delivered to my apartment. Usually, they’re books that I don’t have time to read. But today I got a package from the Hadassah-Brandeis Institute, with a large wall calendar featuring photos and blurbs about Jewish women who have achieved great things in sports.

[Insert old joke about the guy who wrote a book about great Jews in sports, and that it’s a pamphlet.]

The calendar, “Jewish+Female=Athlete: Portraits of Strength From Around the World,” profiles fourteen current stars and thirteen legends from the past. (The only names I recognized: Israeli Judo champion Yael Arad, and tennis’s “other Anna,” Anna Smashnova.) The calendar, along with a traveling exhibition, is a culmination of a two-year project by the institute, a research center at Brandeis University that develops fresh ways of thinking about Jews and gender worldwide.

“Jewish girls deserve to grow up knowing that strength is beauty,” said Shulamit Reinharz, HBI’s founding director, “and children of both genders should look to these amazing athletes as role models. With all due respect to Hank Greenberg, Sandy Koufax and Mark Spitz, the list of sports heroes in our community is a lot longer than is common knowledge.”

As the only girl on the playground who wanted to play softball and hockey with the boys when all the other girls wanted to do–and this is not a joke–Israeli dancing (remember, I went to yeshiva, where horas were an athletic activity), I can relate. I was dying to have names of any women sports heroes in my arsenal, and Jewesses who were “allowed to play” would have helped my case a lot. And perhaps might have encouraged me to become more athletic than I am these days.

The calendar is available for $13.95 and is available online at www.brandeis.edu/hbi or by phone at 781-736-8114. And if you’re interested in information on booking the traveling exhibition, contact hbi@brandeis.edu.