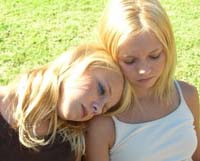 What do you call cute young girls who play in a band and have aspiring music carreers?

If you guessed Hanson, you were close, but no cigar. This time the right answer is Lamb and Lynx Gaede (don’t be appalled by the names: their new sibling is named Dresden). These girls play guitar and violin and sing tunes for their band Prussian Blue. What sort of pre-teen angsty topics do these girls cover? Well, here’s a sample from ‘Aryan Man Awake’:

When the man who plows the fields is driven from his lands.
When the carpenter must give away what he’s built with his own hands.
When a mother’s only children belong to her no more.
And black masked men with guns come bashing down the doors.
Where freedom exists for only those with darker skin.
Where lies and propaganda will never let you win.
Where symbols of your heritage are held with such contempt,
and benefits of country ‘cept tax are you exempt.

Here’s a bit from ‘Victory Day’:

Well sit down and listen, to what I have to say.
Soon will come a great war, a bloody but holy day.
And after that purging our people will be free,
and sing up in the bright skies, a sun for all to seeâ€¦

Yep, the themes are clear: playing ‘mom’, boys (the farmer and the carpenter), their totally favourite country, singing, bright skies and sunshine! How cute.

Despite these happy go lucky themes, some half-empty types have focussed on the more controversial aspects of their lyrics, detecting a hint of white power. An ABC interview excerpt reveals that these folks might be right:

At a different point in the interview:

McFADDEN: So the term ‘mud,’ what does that refer to?
LAMB: A non-white.
McFADDEN: What does it imply?
LAMB: Instead of saying, you know, saying a racial slur, it’s just like oh, ‘mud.’ They call us ‘cracker,’ we call them ‘mud’.

C’mon, guys, who is going to find that offensive? They don’t mean anything bad by ‘mud’: it keeps them from saying nigger, spic, bean bandit, chinks or anything nasty like that!

In all seriousness, though, these cute little tykes are part of the white power movements new attempt to appeal to the kiddies. As Erich Gleibe, operator of Resistance Records puts it:

Eleven and twelve years old…I think that’s the perfect age to start grooming kids and instill in them a strong racial identity.

*sigh*. Lamb and Lynx have been compared to the Olson twins, and Muffti isn’t completely clear about which group is being insulted. Muffti supposes that it depends on what sort of offensive behaviour you hate most. In any case, they are quite popular and are being shameless used by the movement. Even David Duke, one time jackass KKK grand wizard, uses them to draw a crowd. As Gleibe puts it, somewhat morbidly:

“We give them a CD, we give them something as simple as a stick[er?], they can go to our Web site and see other music and download some of our music…To me, that’s the best propaganda tool for our youth.”

Ugh. It’s hard to make Muffti cringe but that just did it. Anyhow, you’ll be glad to know that according to their site, when the girls aren’t being all ‘we’re tough racialists’, they:

Don’t forget to look on the bright side: at least we don’t have to listen to ’em!

p.s. if you are curious about the band name, check their blog for a confusing chemical explanation..